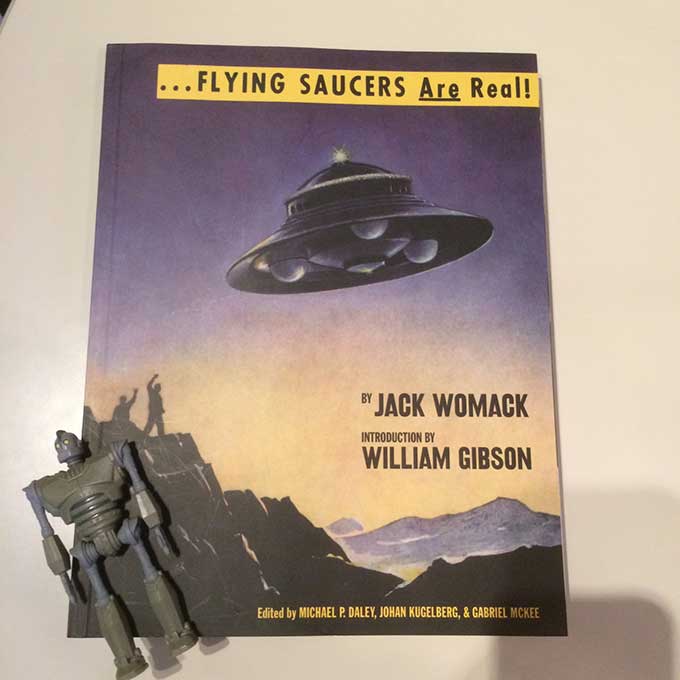 I am not that interested in speculation on whether aliens have ever visited the Earth. What I am excited about, however, are all the ways we have imagined them, from the earliest grainy photos of saucer shapes in the sky to the orchestral-minded, big-eyed aliens from Close Encounters of the Third Kind. In the 1950s and 1960s, UFOs became ubiquitous in the pulp magazines and cheap popular paperbacks. With their lurid cover and claims that “Flying Saucers Have Landed,” these publications would set the popular consciousness afire. They also opened up theories of ever sort as to the origins of UFOs and what role the government might play in covering them up. From the hollow Earth, to Mars, to other dimensions, the UFO myth could contain almost any form of conjecture. Jews? Maybe. Men in black? Most certainly. Spiritual avatars leading us to a new age? Let’s hope so.

“Flying Saucers Are Real” by Jack Womack collects the science fiction author’s personal collection of UFO-related ephemera, and reveals what William Gibson describes in the book’s introduction as the “source code” of the UFO idea that has been programmed into all of us. Womack introduces the popular UFO myth as starting with what is known as the Shaver mystery, the strange tales of Richard Shaver who claimed to have visited the great civilization that lives in the hollows of the earth. Their brethren fled our planet on spaceships, but those left behind—the Dero—seek to kidnap and enslave human beings for the own (usually sexual) means. The editor Ray Palmer published these in “Amazing Stories” in the 1940s, and he would soon go on to make a career of publishing the most garish stories about flying saucers and invading aliens. His magazine “Fate” and books like “The Coming of the Saucers” lead the way for decades to come.

Womack’s collection is startling in its variety: “The White Sands Incident” by Dr. Daniel Fry in which the authors claims to have been inside flying saucers; “Men From the Moon in America” by W.V. Grant explains that the devil lives on the moon and the space race with the Russians is a race to the power of evil; and “Ceto’s New Friends” by Leah Hadley that teaches children not to be afraid if they are ever abducted. Womack’s collection contains book covers with all manner of saucer-shaped craft, amateur drawings of aliens, and those ubiquitous grainy photos. If the images weren’t enough to recommend this book, Womack’s discussion and examination is a smart and funny travelogue through the forest of this wonderful material.

See sample pages from this book at Wink.

Peter Bebergal is the author of Season of the Witch: How the Occult Saved Rock and Roll. He writes regularly on the speculative and the slightly fringe and recent reviews and articles have appeared in The Quietus, The Times Literary Supplement, and Boing Boing among others. He blogs at Mystery Theater and you can also find him on Twitter @peterbebergal

Instead of throwing out all the empties after your next party, why not transform them into some new DIY glassware? Cut back on waste and add some home ambiance with the Kinkajou Bottle Cutter and Candle Making Kit.The Kinkajou is designed as a clamp-on scoring blade to make precise cuts. Just slide a bottle in, tighten […]

Managing servers is complex and expensive—that’s why countless businesses have switched to Amazon Web Services over in-house infrastructure. With so much demand for this cloud platform, mastery of AWS administration has become a valuable skill set. This Certification Training course can be your first step towards proficiency.This extensive course packs everything you need to know about […]

Covering your download tracks isn’t the only reason to invest in a VPN service—high-profile hacks and data dumps in recent years have shone a brighter light on online security issues than ever before. It’s not just public figures who are at risk, and VPNs have increased in popularity even for casual browsing due to reported […]