Flights suspended in Lima, Peru due to UFOs

According to South American sources Planeta UFO and Radio Santiago (Chile), a sighting of as many as a dozen unidentified objects allegedly caused the suspension of flights at the Jorge Chávez Airport in February.

The airport is located in the Callao district of Lima, Peru. What separates this sighting from most others, in the view of Peruvian UFO enthusiasts, is that the Peruvian Airports and Commercial Aviation Corporation (CORPAC) is supposed to have recorded it officially in their documents as an unidentified object contact and shut down traffic for several hours due to this contact.

Ufologist Mario Zegarra claims official documents were filed, and that the incident, involving a number of unidentified objects, hindered air traffic to the point that it caused pilots to be unable to take off or land at the airport for as long as three hours that evening. Zegarra claims there are recordings available of communication between the flight tower and airline pilots that back up his claims. He also says that twelve contacts were logged in CORPAC documents with the identification code of 0000, meaning that the type of object was unknown or unidentified. 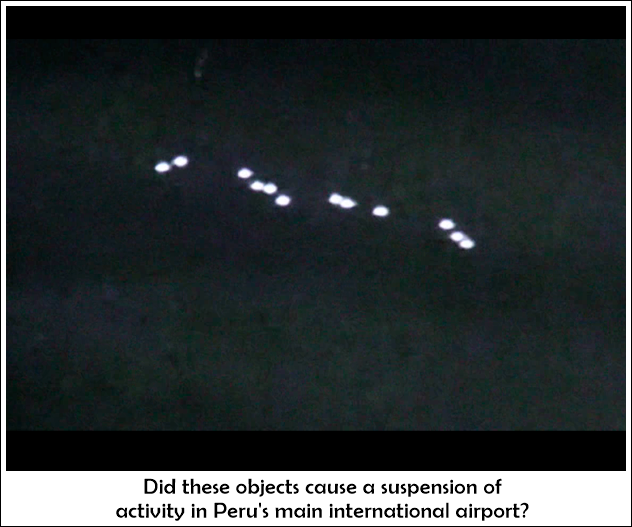 Joshue Cornejo, also an expert on UFOs, explains that the recording happened around seven in the evening. According to Cornejo, the objects were invisible to the naked eye at the time, but it was possible to capture an image by using night vision technology that operates on the infrared band (at lower frequencies of radiation than those that can normally be seen). An image published by the Institute of Hispanic Ufology (IHU) shows about a dozen elliptical objects forming a broken line along the black background of the sky.

Mr. Zegarra is planning a press conference about these observations, to be held in the district of Miraflores in March.