more stories from this episode

Human-robot relationships are a running theme in pop culture, from the cylons of Battlestar Galactica to Spike Jonze’s film Her and last year’s hit show Westworld.

But that kind of scenario might not be science fiction much longer.

Romance between humans and machines is already nearing the realm of the possible. This year, the California company Abyss Creations plans to start selling a new generation of high-tech sex robots — dolls that can actually speak and respond to touch.

And according to artificial intelligence expert Dr. David Levy, in a few generations, we won’t just be having sex with robots, we’ll be marrying them.

Dr. Levy is the co-founder of Intelligent Toys Ltd. and the author of Love and Sex with Robots.

Ten years ago, he predicted that human-robot marriages would be legal by the year 2050.

And as he tells Day 6 host Brent Bambury, he believes we’re still on track to hit that target.

“I believe that we need another two or three decades, at least … I think my original estimate of the year 2050 is about right.”

“There are millions of people out there who, for various reasons, don’t have anyone to love or anyone who loves them. And for these people, I think robots are going to be the answer.” – Dr. David Levy

It might sound a little reminiscent of the 1975 horror film The Stepford Wives.

“There are millions of people out there who, for various reasons, don’t have anyone to love or anyone who loves them. And for these people, I think robots are going to be the answer.” 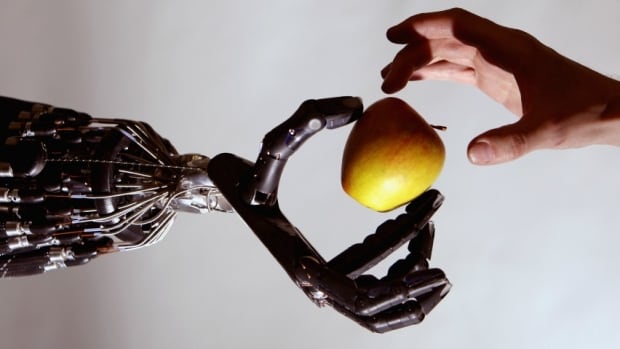 There are two characteristics that require perfecting before humans will be interested in marrying robots, Dr. Levy predicts: the flawless recognition of human speech, and the ability to carry on a good conversation.

“One doesn’t want to have a long-term relationship with someone with whom one can’t communicate,” he says.

But even if the technology is developed to a point where robots can pass for a human, it remains to be seen whether humans will accept them as such.

“As the robots become more and more human-like, so people [will] come to accept them more and more.” – Dr. David Levy

Some skeptics point to the ‘uncanny valley‘:  the theory that humans are naturally predisposed to be uneasy with robots that seem nearly, but not quite, human.

But Dr. Levy believes that theory could be proven wrong once humanoid robots start to look and feel more like us.

“It may well be true to some extent. But remember, the uncanny valley — even if it is true — has the upside, the second side: you go down the valley and then you go up again. And as the robots become more and more human-like, so people [will] come to accept them more and more.” 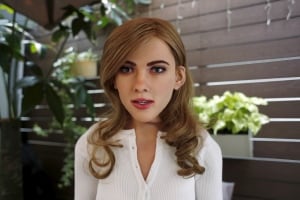 Humanoid robots are starting to look increasingly lifelike — including this robot named “Mark 1”, built by product and graphic designer Ricky Ma to look like Scarlett Johansson.

Who gets to determine robot rights?

A human-robot marriage would pose all kinds of challenges for lawmakers — from the question of whether robots could be granted custody of children or access to their spouse’s bank accounts, to the basic question of free will.

“Nowadays, animals have rights… so why shouldn’t a robot have human rights?” – Dr. David Levy

But many fundamental legal questions pertaining to robotics have yet to be answered — including who’s responsible if a robot commits a crime.

One solution, Dr. Levy says, would be for robots to be insured like motor vehicles. If the insurance policy expires, the robot could be decommissioned.

“Then, if the robot does something unpleasant, it’s all taken care of with the insurance policy.”

Given that lawyers still aren’t sure who would be at fault in a robot crime, there’s a lot of legal groundwork to be laid before governments can plausibly contemplate the prospect of a human-droid marriage.

According to Dr. Levy, those decisions need to be made soon.

“I think, before we get to the stage of having robots that are sufficiently human-like that people will want to marry them, the lawmakers need to consider all these questions and many more.” 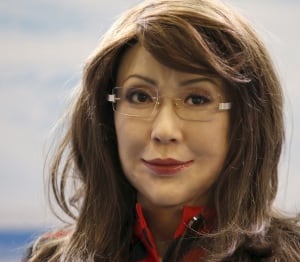 A humanoid robot named “Yangyang” is displayed at a conference in Beijing in 2015. (Kim Kyung-Hoon/Reuters)

Dr. Levy is confident that, one way or another, robots will eventually be granted basic civil rights.

“Nowadays, animals have rights… so why shouldn’t a robot have human rights?”

Even if robots are indeed one day as desirable to humans as Dr. Levy predicts, it remains to be seen whether robots will be equally interested in marrying humans.

But Dr. Levy is unconcerned by the prospect of removing free will from marriage — at least when it comes to human-robot unions.

“We’ll program them so that they appear to want to marry us.”

To hear Brent Bambury’s conversation with artificial intelligence expert Dr. David Levy, download our podcast or click the ‘Listen’ button at the top of this page.