The remains of what appear to be tiny humans have been found in the Whitmore mountain range in Antarctica, an area not thought to have been habited until recent times given the location’s remoteness and frigid temperatures.

The most puzzling thing about these fossils, however, is that they predate the dinosaurs, hundreds of millions of years before anything resembling hominids first appeared. The two near perfectly preserved skeletons are thought to be 600 million years old. Older than any previously discovered vertebrates. Older than any land-living organism yet discovered in the fossil record. Much older than anything even resembling a creature complex enough to be a biped.

The shape of the bones also indicates that they are human rather than primate and the completeness of the remains also suggests that they are from adults rather than infants. Whether these are some advanced civilization that visited and possibly lived on the Earth long before complex life evolved is

While the discoverer of the bones insists that they are not extraterrestrial in origin, there is a distinct lack of any other explanation given the age of the fossils. At a time in history when life was evolving in the seas, and nothing even lived on the land, let alone advanced species such as mammals, human remains are definitely out of place.

Even if such a species were native to the earth, there would have been little for them to feed on outside of very simple life forms in the seas which would have to have been collected and harvested in huge quantities. The land was completely barren and without any shelter or means of making tools or avoiding weather or extremes of heat or cold. In short, the land t that time was completely uninhabitable. 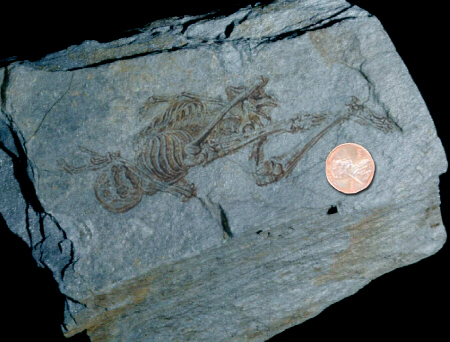 The California Museum of Paleontology describes the period:

“The fossil history of life on Earth has been pushed back to 3.5 billion years before the present. Most of these fossils are microscopic bacteria and algae. However, in the latest Proterozoic — a period now called the Ediacaran or the Vendian, and lasting from about 635 to 542 million years ago* — macroscopic fossils of soft-bodied organisms can be found in a few localities around the world, confirming Darwin’s expectations.”

Ruling out a native species unless they were advanced enough not to need to prey on other species for sustenance the only other plausible option is that the humanoids came from elsewhere.

A suitably advanced species could survive in an environment without any of the natural resources needed to survive as they could create their own or bring tools and technology with them to survive.

The problem with this idea, however, is that they would still have needed to evolve in an environment that has these recourses to become advanced in the first place. Since the Earth 600 million years ago lacked anything other than simple life forms, this cannot be the case for the tiny humanoids, and another explanation must be the cause of their appearance all those years ago.