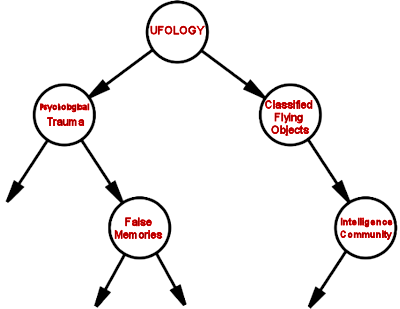 This is square one. It may very well be among the most significant and least understood aspects of the UFO community. In my admittedly professionally unqualified opinion, symptoms of psychological trauma and the related emotional distress account for the vast majority of reports of alien abduction, high strangeness, military abductees (MILABS), targeted individuals (TIs) and similar titles applied. I have come to the conclusion we must accept that to be the case in order to proceed rationally and credibly.

That stated, I do not consider myself entitled to tell people what did or did not happen to them. People may interpret experiences as they choose and discuss them as they see fit. Psychological and physiological conditions, relevant as they may be, do not account for all reports. As researchers, we are best served to proceed cautiously, professionally, and respectfully.

Challenges arise when self-described investigators put forth witness testimonies as supportive of a preferred hypothesis, such as alleged alien abduction and/or military abduction, while refusing to entertain alternative, more likely possibilities. Similar challenges arise when organizations, such as the Mutual UFO Network and the International UFO Congress, offer such researchers (or the human subjects of their research) platforms to promote their interpretations while claiming to be dedicated to scientific study. Doing so tends to take the witness narration more into public scrutiny, as it arguably should at that point. At the least, the professional research process requires questioning the methodologies of the “researchers” involved once they play the science card. That bleeds into issues of ethics and integrity as have been explored on this blog at length, and I’m sure we will consider them more in the future.

My current point, please, is that if we do not make intentional efforts to adequately understand such inherently human conditions as emotional trauma and false memories, and how they pertain to ufology, we are left with substantially incomplete renderings of the very topic we claim to pursue. It is a given that many reports involve incorrect interpretations, so it is only reasonable to acknowledge that to be the case while taking the responsibility to learn more about how they manifest and encouraging others to do the same.

How childhood trauma could affect your life expectancy, relationships and mental health, Independent

Ethics of Exploring the Fringe, Part One: Sharon Weinberger and Nigel Watson on Responsible Reporting, The UFO Trail

I recently browsed some UFO discussion forums and discovered participants who remain terribly under informed about topics such as memory functions and dynamics surrounding hypnosis. If you’re considering reasons ufology gains no traction, this is a huge one.

Witness testimony is the least reliable form of evidence. I’m more than willing to reiterate it’s not my place to accept and reject claims of personal experiences, but if we want to present testimonies as indicative of a preferred hypothesis, collaborating evidence is extremely helpful.

The work of such experts as Loftus, Shaw, Morgan, and what has now become the accepted paradigm of the entire scientific community demonstrates memories are riddled with inaccuracies. It’s a characteristic of human memory. It’s also been demonstrated again and again how easily people can be led to form memories of events that never happened.

Point for emphasis: A hypnosis subject does not have to be intentionally led in order to produce false memories. It can occur during a biased, ill advised hypnotic search for memories of aliens. Actually, it’s extremely likely. That’s a big part of the point. The same can be said for (non-hypnosis) interviews conducted by overeager “investigators.”

People Can Be Convinced They Committed a Crime That Never Happened, Association for Psychological Science

Most of us recall events that never happened, Unexplained Mysteries

We’ve heard UFO witnesses explain, “It wasn’t any kind of craft like I’ve ever seen. It couldn’t have been one of ours.”

It should be apparent that unless a person is up on classified aircraft and related advancements, they’re not in a position to offer such an assessment. There have been fascinating developments in manned and unmanned aerial vehicles over the years, and our eyes might play tricks on us when we see things we’re not used to seeing, such as planes refueling during flight. Did you know, for instance, NOVA reported reported in 2013 about an airplane wing that changes shape as it flies?

At the risk of sounding cynical, this point has long perplexed me. I find it difficult to identify anything other than cultural conditioning (scifi, movies, questionable talk radio, etc.) as a primary reason one would suspect a flying object not to be made by humans.

To try to offer some context, isn’t it kind of like not knowing the make and model of an automobile that drives past and then jumping to the conclusion it must have been manufactured by non-human beings? What would lead a person to think such a thing about aircraft? The answer to that question would be movies like Star Wars and stories like Lonnie Zamora, but I think my point is valid: If it’s flying around and it’s a physical craft, one should suppose it’s made by humans until substantial reasons arise to think differently.

One Nation Under Drones, The UFO Trail

Thought Drones Were New to the Skies? Think Again, The UFO Trail

One of Those Posts About Validated Conspiracy Theories, The UFO Trail

The problem with discussing the influence of the intelligence community in ufology is that many people who would challenge its significance do not have a working knowledge of its history and circumstances. While it is admittedly difficult to identify cause and effect in the often nebulous and confusing intersections of the intel and UFO communities, that doesn’t change the fact many interested in the latter know nearly nothing about the former, and it doesn’t change the fact those intersections are indeed easy to demonstrate.

What’s more, the lack of knowledge of or interest in the IC is found throughout both demographics of what we might term believers and skeptics. It’s okay if they’re not interested, but it’s unbecoming to attempt to argue about topics that they are obviously unequipped to meaningfully discuss in the first place.

In order to add constructively to such discussions, one should not only make efforts to understand specific points presented by others, but activities and context of the applicable era as well. Recent developments in the U.S. intelligence community serve as excellent examples of ways volatile and dramatic situations may arise, as well as the importance of understanding their significance when exploring events that surround them.

Influence of the Intelligence Community in Ufology, The UFO Trail

Psy Ops and Mind Control: Then, Now and the UFO Community, The UFO Trail

In closing, I’d like to add that the same dynamics could be applied virtually across the board to UFO research: If it’s not something you’re interested in, and you haven’t spent time researching it, perhaps you shouldn’t try to explain it to others.

For example, my interest in UFOs – literal reports of unidentified flying objects – has admittedly decreased significantly in recent years. I have come to be much more intrigued by cultural aspects of ufology. You therefore won’t find me going on at length about something I choose not to pursue and I recognize as an area in which others develop a substantial knowledge base.

I identify the differences between things I suspect and things which can be demonstrated to be factual. I’m willing to change my mind when facts dictate. I most respect the work and actions of others who show abilities to do the same, and those are the people I’m most willing to learn from and with. Partisan arguing is unbecoming and unproductive on either side of the aisle. Most importantly, it’s not on the path to truth.