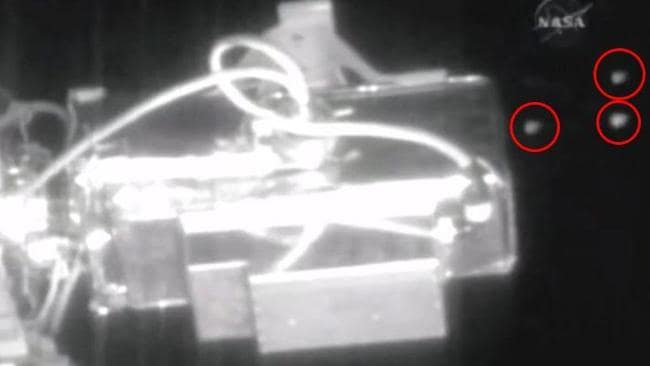 The live video shows objects, which some claim to be UFOs, moving from right to left of the screen.

UFO spotter Streetcap1 flagged up the video with SecureTeam10, which is a group of dedicated alien sleuths who investigate footage and share their findings online.

Tyler from SecureTeam told the Daily Mirror: “He has discovered what some are calling a fleet of unidentified objects moving in the distance behind the International Space Station.

“We have about six UFOs passing behind, and judging from the distance, I would guess that the size of these objects, whatever they are, would be fairly large.

“Much larger than NASA’s typical excuse of ice particles, we must be looking at icebergs.”

He also added that he believes NASA cut the live feed and replaced it with one from inside a briefing room.

Last week a “UFO” was allegedly seen over a town in Normandy in France.

A local in the area shot the eerie footage after coming across the unusual object floating above his village. Taking out his smartphone to film the unidentified object, he captured as much of its movements as he could before his battery died. However as YouTube footage of the sighting circulated online, many people became sceptical, and quickly found an alternative theory.

Fishy Fella offered a possible explanation for the object, claiming they were “fires on a hillside, obscured by mist/fog/haze.”

A number of other commenters agreed.

A wild internet conspiracy theory that NASA was hiding a flying saucer in its secretive Californian research lab has also been debunked.

UFO hunters were in a tizzy when a satellite picture appeared to show a UFO parked up in the Jet Propulsion Laboratory.

The Google Earth pictures revealed a silver, disc-shaped object in its grounds.

But after a whirlwind of alien rumours, one NASA worker has come forward to reveal the truth.

He wrote: “Here is what you think is a UFO.

@ufoofinterest here is what you think is a UFO 🙂 the only alien is me pic.twitter.com/jwRif8esr0

This article originally appeared in The Sun.

Does alien life exist? Scientists are closer than ever to finding out thanks to the Kepler Space Telescope. This revolutionary spacecraft is on a mission to find habitable alien planets.