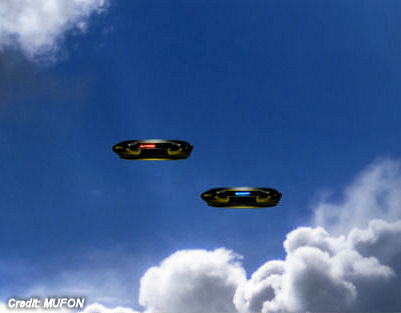 witness stated. “One on top the other and in close proximity to each other. The one underneath the other was moving left to right from side-to-side in a straight pattern, while the other one hovered above it.”

The witness had a feeling the objects were trying to communicate.

“I kind of got the feeling the bottom one was using the craft to wave at me, as to say, ‘Hey, here we are!’ As it was moving side-to-side as in someone would move their hand to wave.”

The witness described the objects.

“These were both saucer-shaped and were a black or dark gray color and both had lights in the front that pulsated back and forth like the Knight Rider car, but only much slower. The color of the lights from my perspective was red on the left, blue in the middle and either yellow or white on the right. I couldn’t make out the size because I couldn’t see them with the naked eye, only through the binoculars. I was using a Redfield brand that was 10 x 50. But they were clear as day to see the shape, color and what they were doing.”