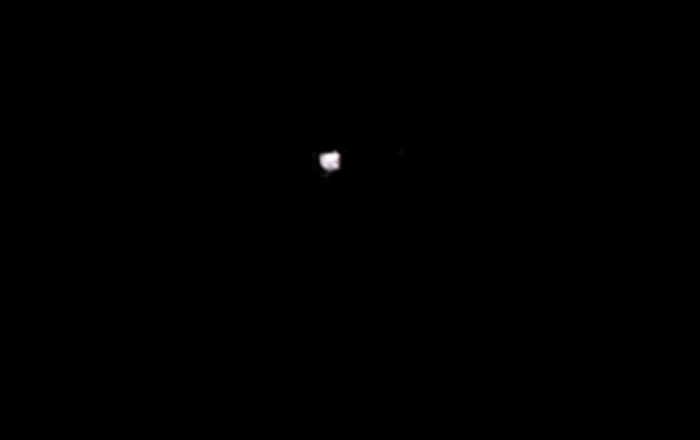 “I went out for a cigarette before bed, it must have been about 11 o’clock at night, and I saw these two lights,” the anonymous resident told Cambridge News, a British daily newspaper.

​”One was roughly 300 feet in the air and white, the other hovering just above the tree line and orange. The orange one hovered for about five minutes before disappearing out of view. The one you can see hovered for at least 15 minutes. It was still there after I got the footage and went back inside.”

The man initially thought the light was a twinkling star — until it started moving. He described its movement as erratic, “not like anything I’ve seen… It darted around slightly and went behind a tree before coming out again. It felt like it was staring at me,” he said.

“I’m quite spooked; I’m not a person who goes out looking for stuff like UFOs, but I can’t think of anything that would explain it. If it was a helicopter or airplane I’d have heard the engine. It could have been a drone, but I just don’t think the light looks right,” he added.

This is not the first time mysterious lights have been spotted over Cambridgeshire.

Last August, reports of an orange ball of light impelled the East Anglia UFO group to explore the area around the city of Cambridge.

At the time of that sighting, the group’s chairman, Tony Buckingham, said, “Around 95 percent of sightings are mistakes or hoaxes… but some are unexplained and stunning.”

On Monday., another resident told Cambridge News that last summer, she saw a similar “cluster of sparkles” to the ones spotted this past weekend.

“I saw a similar phenomenon last summer driving toward Milton from Cottenham,” she said. “This was about 10 p.m. and it was a clear-skied night. I saw clusters of white sparkles in the horizon that disappeared then reappeared in another section of the skyline.”

“I thought they were stars at first, then some flew off at upward angles. It really freaked me out. I remember telling people at work the next day, but I didn’t have any evidence. Then I just forgot about it. Seeing this footage, I’m certain it’s the same thing,” she added.

However, after viewing Sunday’s footage, Buckingham speculates that the light is most likely the planet Venus.

“The image on the video does not appear to move when zoomed in. However, the camera is obviously moving, so this makes any estimation of object movement poor. The apparent movement — when zoomed in — could also be caused by the digital malfunction process of the camera,” Buckingham told Cambridge News on Monday.

“The white spot, with sometimes a slither of color, could be any of the following: Venus — the planet is very large at the moment and can be seen in the west — the International Space Station or other satellite or a bright star,” Buckingham said.

“I think the most likely explanation is the planet Venus. It was very bright last night and appeared to me last night to be at the same angle of elevation in the sky. We do have the time and date, and if the location and orientation were known, we could make a more accurate assessment,” he added.