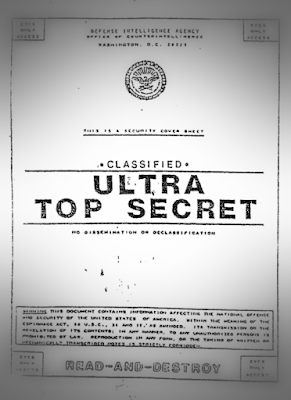 documents. They had seemed to excite him in earlier statements, but he now was somewhat more neutral though a careful reading of them should have given away the false nature of them… The mere mention that the Interplanetary Phenomenon Unit (IPU) was involved should have been a huge red flag. The IPU has been identified and it has nothing to do with aliens or UFOs or anything of the nature. For more about the IPU see HERE.

I found one point hilarious and which nearly everyone has failed to mention. The first page says, “READ-AND-DESTROY. I have to wonder how the document survived with that instruction on the first page, which also argues against authenticity. I will note here that a top secret document’s destruction must be documented saying that it has been properly destroyed. Whoever “stole” this one would have had to violate that rule because he would have had to sign the destruction form.

Heather wouldn’t name names, and in one respect I understand that but that also tends to undermine the validity of the documents. She did say that the person who “stole” them originally had died so that he or she can’t be questioned about how he or she gained possession of them.

Heather hadn’t received the originals either. They had come to her in a .pdf file, which, as I have noted in the past, does not allow for much in the way of a forensic analysis of the paper, ink or anything else that might be gained by examination of the originals. We are left with a study of the format, the font, if the documents conformed to others created at the highest-levels of the government and if the documents fit into our current understanding of the situations being discussed in them.

Instead of analysis of these latest documents on the show, we were treated to another waltz down MJ-12 memory lane from the alleged moment the original documents first arrived at Jaime Shandera’s house in 1984 to the point we have reached now. There was nothing new here, other than listening to Stan talk about all his visits to archives, and he enjoys to do so (and hey, that is fun going through all this material, looking for that single and often elusive nugget) and things he had learned about the men who were named to the original MJ-12 committee, all of which was irrelevant to understanding these new documents.

For those who haven’t looked at them yet, though they can now be accessed through a variety of websites including that for Midnight in the Desert. You can still find them HERE if you are still interested.

I have outlined some of the many mistakes in these documents already and find it difficult to believe that something created at this level would be so riddled with errors. I am sorely tempted to enumerate the errors in the Roswell section but will refrain from doing that. Anyone interested can take a look at Roswell in the 21st Century

(or almost any of the other Roswell books) and compare the information there with that in this document. The errors will be apparent and we have to think that anyone who was far enough inside of the loop to be writing this document would be cognizant of the facts of the case.
I’m going to move onto the Aztec case which was covered in depth here. Stan had made a big deal out of the research in Scott Ramsey’s book while he was on Midnight in the Desert and how careful and meticulous it has been. But this document is at a wide variance with what Ramsey published. This sets up a conundrum… if the document is accurate, then Ramsey is wrong but if Ramsey is right, then the document is fake and I haven’t even mentioned the possibility that both are wrong and Aztec is a hoax.

According to the document, on March 25, 1948, the craft was watched on three radars “belonging to the recovery network of the White Sands Test Range and located in classified areas of southwest New Mexico.” In 1948, it was the White Sands Proving Ground, and if the radars were in southwest New Mexico, that would have prevented tracking of the object to low altitudes in northern New Mexico because the mountainous terrain would have been in the way. In fact, once you get very far north of White Sands, their radars aren’t much good for an object below 10,000 feet. Radar is line of sight.

Again, according to the document, the crash site was secured by 10:45 p.m. that night, which meant that no civilians would have been gathered at the site on the morning of March 25 to watch the military arrive because the object had yet to crash according to these new documents. And, if the civilians were on hand to see the military to arrive, it would have had to be on the morning of March 26, but then the site was already secured and the civilians would have been prevented from getting near.

We are treated to a reference to the base at Flat Rock, Nevada, which, of course, was the scene of much of the action in The Andromeda Strain. We learn that the Blue Berets (whoever they are… no, they don’t exist) came in disguised as National Guard, but I’m not sure how you pull that off since the uniforms worn by the National Guard are the same wore by those on active duty with the Army. I suppose they removed their Blue Berets and wore regulation headgear.

But there really doesn’t seem much reason to drag this out. The documents are faked. I spoke with Stephen Bassett yesterday afternoon, and almost the first thing he said to me was that he too thought the documents faked. We discussed some of the bloopers in text, the problems with the classification markings, and all the other errors. Bassett said that he didn’t think these were disinformation, but more likely just someone outside the government who had too much time on his hands. I’ll add someone who didn’t actually know much but who had gotten his hands of William Steinman’s book UFO Crash at Aztec.

What we need to do now is place these documents in the same file folder with the Roswell Slides, the alien autopsy and little grey men who like strawberry ice cream and Tibetan music. Footnotes in the great journal of UFO information, or maybe, even better, have them all deleted from anything to do with UFO research because they have only distracted us. They have added nothing to our knowledge.