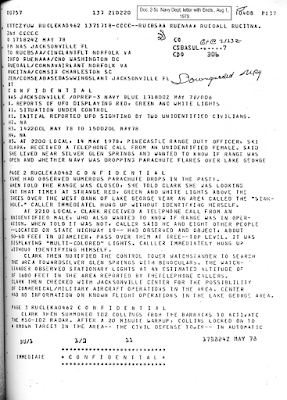 means “Operational Report”, and “3” refers to a category meaning “Serious Event/Serious Incident”. There are dozens of available publications that detail the OPREP–3 process. One such publication, promulgated by the Chairman of the Joint Chiefs of Staff (CJCS), is an Instruction dated 1st of December, 1993, titled Joint Reporting Structure Event and Incident Reports. Page 1 establishes:

“The OPREP–3 reporting system… …is used by military units at any level of command to report significant events and incidents to the highest levels of command.”

“Command Posts use the OPREP–3s to immediately notify commanders of any significant event or incident that rises to the level of DoD, AF, or MAJCOM interests. Submit the applicable OPREP–3 regardless of whether or not the event is being reported through other channels.”

This is interesting, and we have inadvertently known about it all along. After the closure of the United States Air Force’s (USAF) Project Blue Book, no reporting channels, except the Communications Instructions for Reporting Vital Intelligence Sightings (CIRVIS) system, and the “Air Force Reporting System” (AFOREP) channel, were to be used for UFO reporting in the USA. Even knowledge of those was kept reasonably quiet. As we shall see, there is irrefutable, documented evidence that the AFOREP channel, which contained an early OPREP–3 procedures, has been used to report UFOs to higher commands.

On the night of May 14, 1978, the United States Navy’s (USN) Pinecastle Electronic Warfare Range, in Florida, endured a very unusual incident. A UFO was both visually sighted and tracked by primary radar. It was reported as displaying red, green, and white lights, and was accompanied by no sound. Also, the UFO apparently took evasive action when there was an attempt to lock radar on the object. When records relating to the case were released under the Freedom of Information Act (FOIA), even the Public Affairs officer, N. P. Young, stationed at Jacksonville Naval Air Station (NAS Jacksonville), who processed the records, had this to say about the incident:

“I have never been a believer in UFOs, but I assure you I am convinced that a number of people witnessed an unexplainable event that night.”.

Five pages of records were released relating to the incident, including a two page telex sent from NAS Jacksonville to the Commander–in–Chief of the USN’s Atlantic Fleet (CINCLANFLT) at Norfolk, Virginia. Classified CONFIDENTIAL, one line states:

Note the term “OPREP–3”. Further, beneath this line, the telex reads:

Note the term “UFO” is openly used here. This is indisputable proof that a UFO event, of some sort, caused the sending of an OPREP–3 to the CINCLANFLT. I have imaged the page above, top.