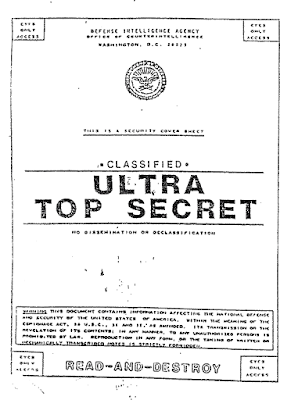 give me names, only that they were ex-military and had possessed the documents for a very long time. She didn’t know which government agency had originated them, and there seemed no way to verify them through government sources. We also seem to suffer from the same problems that we’ve always had and that is that we’re working from copies and not originals. This makes the whole process problematic… and I think we can point to many cases in which copies of documents have turned out to be forgeries (think CBS and George W. Bush’s military records and any number of MJ-12 documents).

The use of “Ultra Top Secret” also raises questions. Ultra was the British code name for their operation to intercept and read high-level, highly-classified Nazi message traffic. This code name seems inappropriate for use by the US government or military. In keeping with that, there are several mentions that these documents are classified “Above Top Secret,” but really is a misnomer… Top Secret is the highest classification, but the number of people allowed to review certain documents can be further restricted by adding code word. Only those who are code word cleared would have access to the document and by adding a second code word you restrict the numbers even further. So, if there are two code words, you have a document that can be said to be two points above top secret, though that is not actually fact. While we can argue the semantics of this, I don’t believe someone on the inside would talk of a document being classified two points above top secret, but rather suggesting it was double code word protected.

The description of the Roswell case, and the chronology is not accurate based on all the documented evidence available. As but a single example, the document tells us that Mack Brazel alerted the authorities at Roswell Army Air Forces base (which is not the correct name of the facility) at “05:18” (which should have been written as 0518 hrs) though it is clear that it was the sheriff who alerted the Army and Major Marcel himself said that he learned about it as he was eating lunch.

One of the major red flags is, “At his arrival in Roswell, General Twining relieved Colonel Blanchard of command…” There is no evidence of any such order. The relief of a commanding officer is a major event. Had Twining arrived in Roswell and assumed command by virtue of being the senior officer present, that is not the same thing.

I’m going to leave the Roswell segment here, though I see many other problems, and move onto the “Aztec UFO Crash,” which is featured more prominently (which means I’m not even going to discuss the fraudulent IPU). As I was reading this, I though the same thing that one of the commenters made on the previous post, that is, I was reminded of William Steinman’s nonsensical book, UFO Crash at Aztec. If we compare this to Scott Ramey’s book, The Aztec Incident, the chronology here is all wrong. If we accept Ramsey’s book as accurate, then the document fails.
In this document, they have given the times which had been Mountain Standard Time, to what they call Local Time or LT. If this was strictly a military document, I would have expected the times to be converted to Greenwich Mean Time or Zulu Time. Not really a fatal flaw but one that seems to be out of place.

I’m now going to skip all the trouble with the Aztec aspect of this simply because there is so much that is simply wrong. And if this is a real briefing, where is the mention of Del Rio, Plains of San Agustin and Kingman?

Anyway, we are now treated to the transcript between an EBE and an assortment of interviewers who are never named for a reason that I can’t fathom (unless, of course, they don’t exist). At first glance, I was drawn to the comment about why the aliens had coming to Earth for centuries and learned, “And we like trees?” I wondered if this was the same group of aliens that liked strawberry ice cream and Tibetan music.

I did mention this to Stephen Bassett who wondered if someone had gone to all the trouble to fake the documents, all the study that it had taken and the time to create it, if he or she would then sabotage the effort with some ridiculous, off the wall comment about liking trees.

My first reaction was to think that was an interesting point, but I had yet to carefully read the document. Having now done so, I see that there really is nothing new here. The information about Roswell is wrong, the name of the base is wrong, the chain of command is wrong, and even the higher headquarters at Fort Worth is wrong (it wasn’t the 5th Air Force, but the 8th).

The Aztec material is derivative of Steinman’s book, the MJ-12 information is taken from there (or maybe from any of Stan Friedman’s many writings on it), and there is nothing that is suggestive of advanced scholarship. The writing does not sound as if it came from a government source, and without names, without government agencies, without any way to check things out, this just doesn’t seem to be authentic. I withheld my opinion on this, just announcing it so others would have a chance to review the documents, but it is now clear that this does nothing to further our knowledge and just confuses an already confused issue.