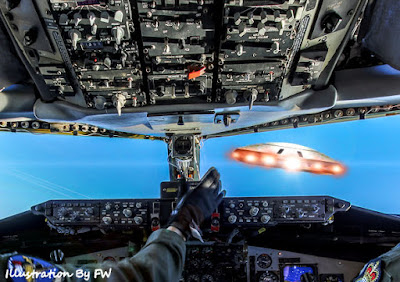 A TERRIFYING Cold War near miss witnessed by an entire crew of a US Air Force spy plane has been laid bare in a UFO dossier.

They include the gripping account of an unexplained incident on 19 October 1982 when a USAF RC-135 plane snooping on Soviet military activity was buzzed by “a big object” over the Med.

British troops stationed at RAF Troodos – a base on Cyprus – listened in as the American crew called for help as a UFO cloaked in “a multitude of flashing lights, 20 at a time” zoned in.

During the 90 minute incident, two US Navy F-14 fighters were scrambled and an RAF Phantom was diverted from a flying exercise to tail the intruder spotted on the south of the island.

As the three jets approached the American crew watched the UFO turn away and head toward the African coast, but nothing was seen by the fighter pilots.