Investigators of the paranormal in Texas believe they have captured video of something very strange, paranormal activity. The sighting was captured in the Magnolia Hotel in the south of Texas.

Black Mist Captured On Video In Magnolia Hotel In Texas

A YouTube member by the name of Strange Town uploaded a video (watch below) that seemed to show a black like mist entering a room in the hotel named the Campbell Room. The black mist appeared from the left side in the early hours of the morning on August 5.

White Mist Clouded Around The Lens Of The Camera

When the black mist entered the room, white mist then started to cloud the camera lens. Investigators then said that about 10 minutes later a white vortex that appeared to be even more visible quickly rotated right in front of the camera lens.

Strange Town runs a series of videos on YouTube of paranormal investigators who try to capture evidence of ghosts in regions that are said to be haunted in and around Austin. Some of the guests of the hotel have said that they have seen many instances of paranormal activity in and around the hotel.

Owners of the Magnolia Erin and Jim Ghedi started to restore the hotel back in 2013, and then they opened it up to the members of the public and began giving them ghost tours around the hotel. Before this, the hotel had been vacant for more than twenty years. The hotel had started off just like a log cabin with two rooms back in 1840 and built by James Campbell, one of the original Texas Rangers. By the middle of the 1900s, the hotel had become the largest in Seguin Texas. 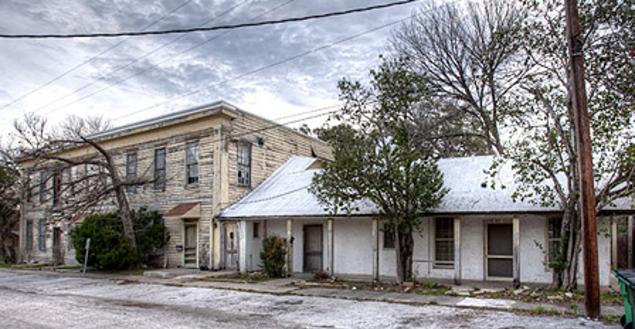 The story goes that Campbell was massacred by the Comanche and is now seen roaming about the cabin as a ghost. The owners of the Magnolia Hotel have said that what they have captured in incredible.

It has been said that numerous guests have checked into the hotel during the years and this has included Wilhelm Faust, the infamous serial killer from Texas, who is said to have never left the hotel. Faust was said to have been a guest at the hotel in 1874, and during the night he was said to have stolen a horse from the hotel’s stables and gone to New Braunfels and murdered a 12-year-old girl by mistake and attacked his wife. He then went back to the hotel and went to sleep. He was captured and then convicted and said that he had murdered twice before. Faust was shot to death through the window of the courthouse by an assailant that was unknown.

In 2012 the hotel was put on the most endangered list in Texas, having been abandoned since the late 1900s and it was rescued by the Ghedi family who wanted to restore it back to the 1880s. Since that time there have been many paranormal sightings, and this caused loss of contractors who refused to work on the building and restoration of it was stopped. A total of 13 spirits have been found, and today the Magnolia Hotel is one of the most sought after by paranormal researchers, TV shows, and investigators.