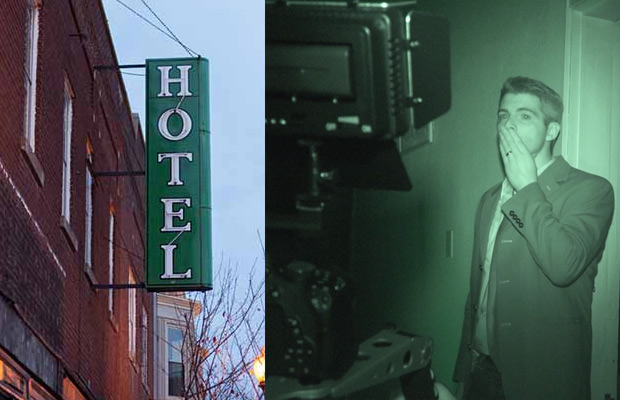 You might not know it from first glance, but the quaint and lovely little town of Lawrenceburg, Kentucky is home to one of the most haunted buildings in the entire state. The Anderson Hotel, which has been abandoned for over thirty years, is the unlikely site of some of the most violent and visually stunning paranormal activity documented in the last several decades, manifesting on camera in the form of aggressive bite marks from invisible jaws and producing a mysterious haunted artifact that continues to stump researchers.

In fact, the ghostly activity inside the long-forgotten walls of the Anderson Hotel has gotten so terrifying, so violent, and so unpredictable that the location has been sealed off and all ghost hunts ceased. We were the last paranormal investigators to spend the night in the building, and we experienced first-hand the frightening reason why the haunted Anderson Hotel’s doors are now locked. I first visited the Anderson Hotel in July of 2015 and was immediately obsessed with the building. Tucked away atop a lovely cafe, you’d never know the shuttered business was even there if it weren’t for the rusting neon ‘HOTEL’ sign hanging outside the building’s second story. Our friend and colleague Jeff Waldridge of the Lawrenceburg Ghost Walk had invited us to investigate the building after a very strange incident with our mutual friend and paranormal researcher Donnie Irvin.

During a routine ghost hunt, Donnie began to notice a strange burning sensation on his foot. After the pain began to intensify, he pulled his shoe off to discover a fresh set of teeth marks. It was such a bizarre scenario that no one was quite sure how to explain it. 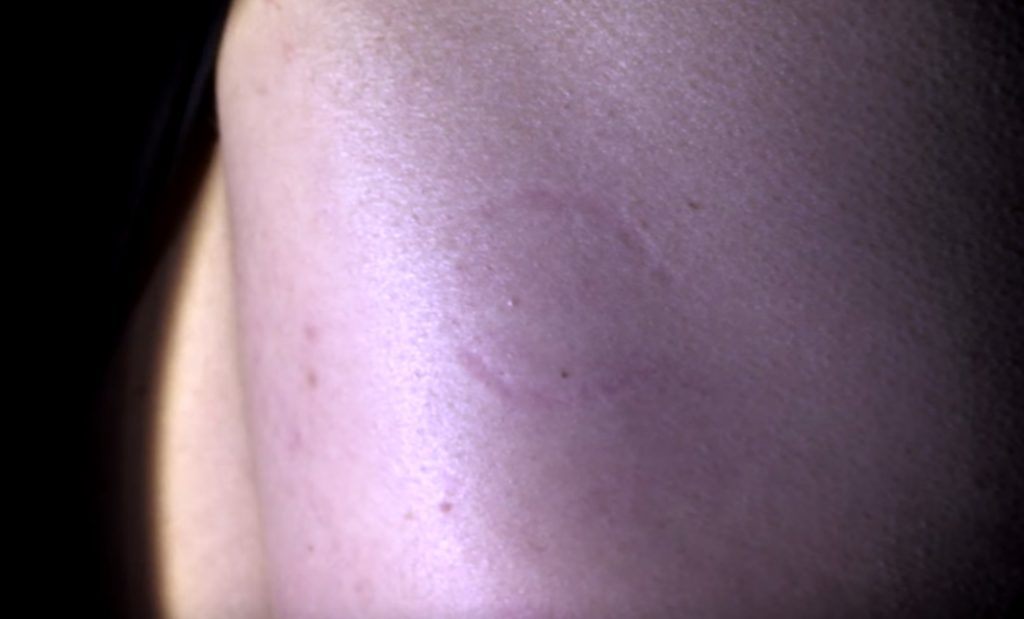 The Anderson Hotel is somewhat of a recent discovery as far as the paranormal goes, thanks in no small part to Waldridge, who visited the building two years ago during an open house, and after doing countless hours of research and digging into the Hotel’s past, uncovered the building’s sordid history of drugs, prostitution, and death. Lots and lots of unnatural death, including at least three suicides. Waldridge had a hunch that he’d uncovered a haunted hidden gem.

Before long, the owners of the building allowed Waldridge and Irvin to begin conducting extended paranormal investigations of the Anderson Hotel. It wasn’t long before the ghostly activity began to kick up, with phantom footsteps echoing through the long halls of the hotel and shadowy figures darting in and out of the untouched rooms, but it wasn’t until Waldridge made a grisly discovery that the paranormal activity began to turn violent. Wedged under a stairwell in the rear of the building was a mattress with a rusty-brown stain that appeared to be blood. The mattress appeared to the same one that a young girl had cut her wrists on decades earlier in one of the Anderson Hotel’s many suicides. When Waldridge and Irvin dragged the bloody bed to the room where the suicide took place, all hell broke loose. Visitors began to have their hair pulled, strange creatures were spotted dragging themselves along the floor, and eventually, Donnie was bitten.

During our first investigation of the building, Waldridge brought along a bottle of luminol, a chemical used by forensic labs to discover trace amounts of blood at crime scenes. When sprayed on the mattress, the stain lit up like a Christmas tree, confirming that the large, rusty blotch was, indeed, blood. As Waldridge and Irvin continued their investigations, they made even more strange discoveries, including a tablet covered in strange writing. The wood plank appeared to have a connection to the violent haunting, subtly changing the activity in the Anderson Hotel depending on which room it was placed in. The plank was dubbed The Summoning Tablet and donated to the Traveling Museum Of The Paranormal And The Occult for further study, though six months later, we’ve yet to decipher the strange script.

One interesting observation about the artifact had led us to believe that the name “Summoning Tablet” may be a misnomer, as the plank appears to shut down paranormal activity in its vicinity. It would appear to us that one of the Anderson Hotel’s former residents was actually trying to drive away the ghostly activity that was plaguing the building. Eventually the Anderson Hotel’s violent and disturbing activity reached famed ghost hunters Nick Groff and Katrina Weidman, who featured the building in season one of their hit series Paranormal Lockdown. During their three-day investigation of the building, not only was the pair overwhelmed by the amount of activity they experienced, their camera-man, Rob Saffi, was actually bitten on camera by the same aggressive entity that chomped down on Donnie Irvin’s foot just months earlier.

Since the episode of Paranormal Lockdown aired, countless ghost hunting teams have made the trek to Lawrenceburg, Kentucky to visit the now-infamous Anderson Hotel, many of them falling victim to the same violent activity the building has become known for, some of it so intense that many swore they would never step foot inside the building ever again. Eventually, the building’s owners made the decision to completely stop the investigations, turning away curious ghost hunters who had no idea what they were walking into.

The night before the Anderson Hotel was sealed up, I got the opportunity to investigate the building with Jeff Waldridge and my partner Greg Newkirk. We would be the last paranormal investigators to step foot in the building for the foreseeable future. Knowing this, we concocted a never-before-attempted experiment in an effort to make contact with the aggressive entities in the aging hotel, hoping we could get to the bottom of the violent activity once and for all. What was already a frightening experience went off the rails in a way that we could never have anticipated. While full documentation of our experiment and its results will be presented at a later date, I can reveal this: Greg was also bitten. Once on his arm, once on his foot, and numerous times on his side. The strange marks came quickly and without warning, in full view of two high-definition cameras, and accompanied by strange, upsetting events that were experienced by everyone present. Even now, we still have trouble watching the footage. As we left the building, Jeff turned the key on the Anderson Hotel’s lock for the last time, and though none of said we world, we all knew it was the right thing to do. There was no denying the level of paranormal activity inside the Anderson Hotel was far too volatile for amateur investigators, and it had gotten worse than ever.

Fortunately for those curious paranormal enthusiasts, there’s  still a way for you to get the chance to visit the Anderson Hotel – from the outside, of course.

If you attend the The Lawrenceburg Ghost Walk during the 2017 season, which kicks off near the end of summer, you’ll hit all of Lawrenceburg’s most famous haunted hot spots, including a visit to the boarded up Anderson Hotel, where Jeff Waldridge himself will give you the low down on the history, ghost stories, and evidence collected from the building. It’s the closest you can get to the Anderson Hotel’s spirits without the risk of being attacked yourself.

Perhaps eventually the violent paranormal activity inside the abandoned hotel can be understood in a way that will help bring the frightening events to a close, but for the time being, the many rooms of the shuttered building remain frozen in time, stuck in a mysterious loop, where the tragic events of the past are doomed to repeat themselves. Here’s hoping that in time, the spirits of the Anderson Hotel are ready to break free.. and be a little nicer. Would you risk spending the night inside Lawrenceburg’s haunted Anderson Hotel? Tweet us @WeirdHQ, drop us a line on Facebook, or start a conversation in the comments below!