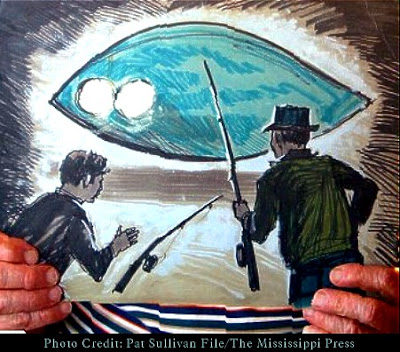 A retired Navy chief petty officer recently contacted The Mississippi Press about the sighting that he can’t forget.

Mike Cataldo of Rotonda West, Fla., said he was on the pre-commissioning crew of the USS Tunney under construction at Ingalls Shipyard. Dusk was setting in as he and crew mates Ted Peralta and Mack Hanna were on U.S. 90 heading to Ocean Springs. Peralta was driving, Hanna was in the front passenger seat and Cataldo was in the back seat.

“We saw a very strange object in the horizon going from northwest across Highway 90. It was going pretty fast. It went down into a wood area and into the marsh. It hovered over the tree line, I guess, maybe a minute. We actually pulled off the road and watched it. We said, ‘My God, what is that.”‘ Cataldo said.

“We saw it, no question about it. We talked about it. Was it a shooting star, a meteorite? This was very different,” he said.

Cataldo said the object looked like a large tambourine with little lights flashing on it.

“As quickly as we saw it, it just vanished,” he said.

Cataldo said he had a second sighting minutes later, this time in St. Andrews as he neared his home.

“It wasn’t as high up as we saw the first time. It was real,” he said.

Cataldo said he rushed and told his wife what happened.

“I was almost hyperventilating. I wasn’t shook up, but I was excited I saw this thing,” he said.

The next morning, Cataldo contacted his executive officer on the submarine and made a report.

The following Monday, he contacted Keesler Air Force Base in Biloxi and left his telephone number, he said.

“My executive officer and crew members thought we were just lunatics, just whacked out,” he said.

“It never came up again. Keesler never called or did anything,” he said.

“It was the strangest thing. It was kind of scary,” Cataldo said.

Cataldo retired from the Navy 19 years ago. He was last in Jackson County in 1974.

Cataldo said he has never met or talked to Hickson.

Hickson said neither he nor Parker wanted their story given to the media. Their only objective was to notify the proper authorities, the sheriff’s department.

“I’ve had a few people who said they didn’t believe it, but I’ve never had any ridicule and my family never had. That’s one reason when this thing first happened to Calvin and I didn’t want to talk about it because I didn’t want to be called crazy. But it seemed to me we had to tell the proper authorities,” said Hickson, 70, who lives in Gautier.

The rest is history.

Hickson penned a book about the encounter, was interviewed numerous times by the scientific community and made the circuit at seminars on extraterrestrial. In 28 years, he never deviated from his claim of the occurrence behind the old Shaupeter Shipyard building on the Pascagoula River – even under hypnosis.

Parker, who was 19 then, had trouble dealing with what happened. He is now living in Louisiana.

“He’s not the same man as before. It just ruined him,” Hickson said.

Hickson described the three creatures that floated out to them as pale, ghostlike and about 5-feet high. They had crab-like claws or pinchers and rounded feet. He said they appeared to glide rather than walk.

Hickson said he was taken aboard the oval-shaped, well-lit space craft and examined with some type of “eye.”

“Some kind of way they examined me. I’ve had a feeling ever since it happened that they know where I’m at all times and what I’m doing,” he said.

“These things are robots. I didn’t see any eyes. They had no indication of breathing. They didn’t have a mouth. It was a straight slit. It seems they had something to do and they just actually done it. Took us back out there, put us down and they left,” he said.

Hickson said he does not know how long they were with the aliens but he would like another encounter with them.

“When it first happened, I wouldn’t go in the night by myself. I would have nightmares. My wife really helped me get through this thing,” he said. “Now the fear is all gone. I want to meet them again and see if they will take me to their world. I believe if they do, they’d bring me back. Our whole world here is getting into a terrible shape.”

Glenn Ryder, sheriff’s department shift captain that night the call came in from Hickson, said it was a busy night, around 11 p.m. when Hickson called from a pay phone and was insistent on talking to then-Sheriff Fred Diamond, who happened to be in bed.

Ryder said Hickson then asked for the second person in charge. That happened to be Ryder. Hickson told Ryder he had something to tell but feared Ryder would laugh.

Ryder told him to go ahead and when Hickson finished, he did laugh.

“I told him to wait there and I would come and talk to him. He said he was going back to his house and gave me the address so I could come there,” Ryder said.

“Calvin Parker was just hysterical. He was having fits. I took them in the patrol car to the sheriff’s office,” Ryder said.

Hickson and Parker were questioned extensively apart and then put in a secluded room together where a tape recorder had been planted to catch them in a lie.

“That boy (Parker) was really shook up. Charles was composed. The boy had just come down here from Jones County had always lived out in the country. He kept telling Charles on the tape not to talk to us. He said if (Charles) told them anything about what happened they would come back and get them,” Ryder said.

“One thing led to another. We went to the site at Shaupeter, where Colley Towing is now. He showed me where it landed and picked him up.”

Ryder said no physical evidence of a landing – burn marks or footprints – were found.

He said after the story broke calls came in from across the United States, England and Canada.

“They were pretty well convincing something did happen to them,” he said.

Ryder said there were other calls fielded about sighting of a streak of light that night, but only Parker and Hickson reported being taken aboard the space craft.