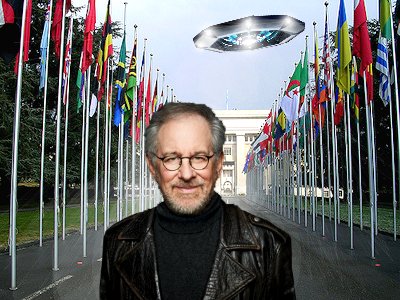 Speigel was a young New Yorker at the time who had just put together a record album documentary on UFOs. He realized there were a lot of credible people talking about UFOs and pitched the project to CBS Inc., who liked the idea and sent him around the country to interview these people. Among those he interviewed were scientists, politicians, law enforcement and an astronaut, Gordon Cooper, who recalled his personal UFO experience.

A couple years after producing his record, Speigel heard about an effort to get the United Nations to officially look into the UFO issue. The effort was initiated by Grenada’s Prime minister, Sir Eric Gairy. Speigel decided what the effort needed was a presentation with the likes of the credible people he had in his record. So, with the confidence of a young New Yorker, he contacted the ambassadors to Granada and offered his services. The government of Granada liked his idea and the event planning began.