The Karakum Desert, located in Central Asia, covers most of the territory of Turkmenistan. The 13th largest desert on the Earth covers an area of approximately 15,440 square miles and is home to one of the weirdest phenomena in the entire world: the Darvaza Gas Crater.

The entire desert is rich in natural gas and oil, so research and digging are no rare occurrences in the vast and arid area. In 1971, Soviet engineers were drilling on the location of the crater, searching for an oil field, but instead of an oil basin, they discovered a natural gas pocket. Soon, the ground beneath the drilling equipment collapsed, swallowing the machines and turning into a gas-filled cavern. There is another story which says the hole appeared in the 1960s and was set afire 20 years later, so the exact year of Darvaza’s appearance is not very certain.

Aware of the dangers of the poisonous methane gas, the scientists made a decision to burn off the gas and stop the leakage. This process, known as flaring, is quite common. The scientists made calculations that the gas would burn off in few weeks, but they were wrong. The sinkhole has been burning for the last 46 years. Scientists have no accurate information about the amount of gas left in the hole, so no one can guess when the burning will stop. The image of the huge fiery hole in the ground is striking, so it’s no wonder that the local people have named it “The Door to Hell.” The word Darvaza itself means Gate in the Turkmen language.

The crater itself is 98 feet deep, and 226 feet in diameter. It is located about 160 miles away from Ashgabat, the capital of Turkmenistan. The bright yellow flames look spectacular, especially by night when the crater can be seen from a distance of 25 miles. The hole burns at high temperatures. Therefore, visitors can stand next to it for only a few minutes. The Door to Hell has become a tourist attraction, with more than 50,000 visitors in the past eight years. Until 2004 various shops were surrounding the crater, but they were removed for an unknown reason. 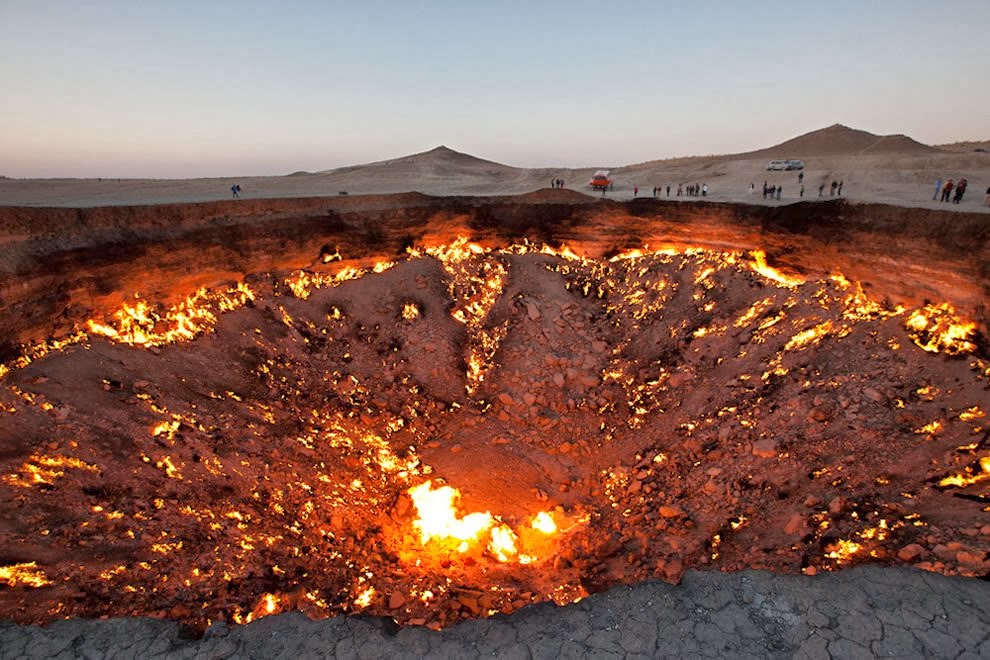 The Darvaza Gas Crater has been an object of interest to many scientists and explorers. The famous Canadian explorer George Kourounis went farthest, becoming the first man to ever descend into the crater.

Equipped with a special suit made of heat-reflective material and a breathing apparatus, he walked the bottom of the sinkhole for 15 minutes, collecting samples of dirt for examination. The analysis of the samples revealed that bacteria were living in the hot, harsh environment.

Turkmenistan plans to increase their export of natural gas and oil, as they have substantial, unexploited reserves. In April 2010, Gurbanguly Berdimuhamedow, the president of Turkmenistan ordered the crater to be closed so exploration of natural gas fields in the area could be undertaken.

However, this never happened and The Gates of Hell are still burning. Nearby to Darvaza, two more similar craters can be found, but neither of them is on fire.