Hanging Temple continues to astound after 15 centuries. Located in Datong City, the Shanxi Province, this ancient Chinese Monastery is built cleverly into the rock wall of a precipice using cross beams and hangs 75 meters above the ground.

It was built by monk Liao Ran in 491 AD during the Wei dynasty and remains intact to this day. It has been altered and built upon, restored and maintained to keep it in good condition from as early as the Ming Dynasty (14th-17th centuries).

Despite this extensive work, the temple itself was built to last of its own accord, its position below the summit giving it decent protection from elemental forces, as well as its great height offering it safety from flooding. 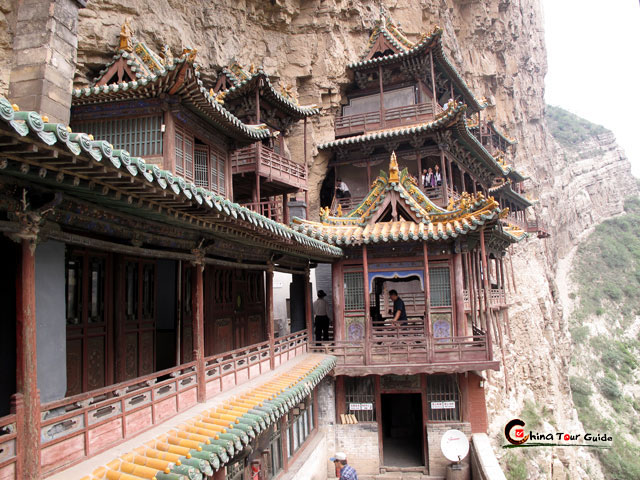 Poles were added as a propping device at some point to hold some of its weight and provide some extra support. A travel website describes its appearance from below as like a castle that has fallen from the cliff and left behind its remnants.

Another interesting factor in the temple’s past and present popularity, and what may have possibly aided its survival is that it is a religious sanctum for China’s three largest faiths- Buddhism, Taoism, and Confucianism.

It is theorized that the Monastery’s embracement of these major religions is what has protected it from destruction during numerous wars in the region. These three faiths housed together under one roof is a rarity.

The Hanging Temple is a center of tourism for Datong City, mixing architectural and historical wonder. The temple is comprised of 40 halls and two main pavilions, both three stories high connected via walkways.

The bridge between the pavilions is about 10 meters long. Reaching the temple itself requires tourists to walk up a stone staircase that has been carved from the rock wall. Within are delicately created statues and relics made from a variety of materials.

Included in these artifacts are the statues of the three founders of each of the above-mentioned faiths- set side by side. Admission is listed at around 20USD, or 130CNY to explore.