There have been many mysteries surrounding the Great Pyramid of Giza but one of the biggest of the mysteries is why the pyramid is missing the capstone from the top when it happens to be one of the most precise of the ancient structures on Earth.

One very interesting story has been associated with the Great Pyramid with the visit of an inventor from Britain, Sir Siemens. It was said that when he reached the top of the pyramid along with those guiding him, he got an electric shock whilst trying to take a drink from a wine bottle. Siemens being a scientist, of course, was then said to have taken a newspaper and moistened it and wrapped it around the wine bottle, thus converting it into an early capacitor, the Leyden jar. When he held the wine bottle over his head it was charged with electricity.

Whilst a pyramid is being constructed, the top stone, which is called the capstone, is the final part to be placed onto the construction. Essentially this means that the capstone is the most important part. Some experts have suggested that the capstone of the Great Pyramid has always been absent and it was left this way on purpose.

However, others have argued that if you at the characteristics, not to mention the beauty of it; it is not likely that those building the Great Pyramid left it unfinished by not placing a capstone on the top. Without the white limestone original coating blocks, the pyramid is also lacking its summit, which would have given it around another 9 meters in height.

Capstone Of Great Pyramid Could Have Been Made From Gold

There are some who have said that the capstone of the Great Pyramid of Giza was made from gold and that it had been stolen from the pyramid at some point in the past. This theory is difficult to believe, how someone would be able to remove a capstone that had been made of gold from the top is not known. Bear in mind that they would not have heavy lifting machinery as there is today. 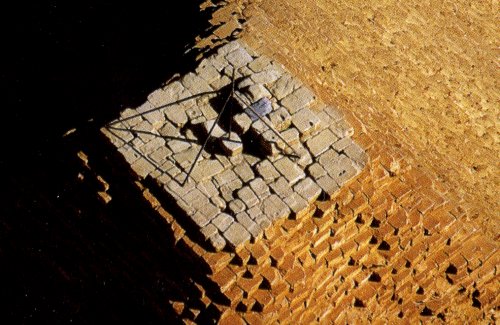 Miguel Perez-Sanchez, a researcher from Spain, said that the Great Pyramid had not been left unfinished. He went on to say that he thought a huge sphere had been located on the surface. He proposed that the sphere ancient Egyptians had put onto the top of the Great Pyramid was the symbol of the Eye of Horus and that it would have around 2,718 royal cubits in diameter. He said that the sphere would have been placed on the top and it would have been to worship the Sun and Sirius, which is the brightest of the stars in the sky and associated with Isis.

Along with the missing sphere from the top, analysis has led researchers to find the inclination angle, 51.84 degrees, the platform supporting the sphere would have a pi perimeter of royal cubits with the height of pyramidal vertex being 277, 778 cubits, which Perez-Sanchez claims would be equal to dividing 1,000,000 between 3,600. He said that the finding of the original shape, along with the Great Pyramids dimensions, the reconstruction of it and the analysis had revealed that the architecture had been made of pure geometry, astronomy, mathematics, and geodesy.

Great Pyramid Could Have Been A Pyramid Power Plant

To get back to the link to Siemens, the British inventor, it was said that the Arab guides who had been with him then became frightened as they thought he was up to witchcraft. They tried to take one of the companions of Siemens and when he noticed what they were doing, Siemens then pointed the bottle towards the Arab and he was knocked to the ground.

It has been suggested that perhaps many thousands of years ago there was a type of ancient capacitor placed on top of the pyramid and if so the Pyramid Power Plant theory may be correct. Many people are of the belief that the Great Pyramid was not built to be a tomb but instead, it was a huge ancient power machine that was able to gather the Earth’s natural energy.