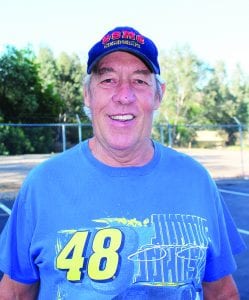 It was my intention with this series to delve further into the history of George Adamski’s contribution to the UFO phenomenon, when I got a phone call from a longtime VC resident, Chuck Lehneis, who had a remarkable story to tell about a night in 1976 where the Milky Way was spilling out onto the sky above Bates Nut Farm.

Lehneis, who is 70, and a disabled Vietnam War vet, had moved to Valley Center the year before. That was in the days when the Valley barely had 5,000 people and the skies were pristine and filled with diamonds. It was a night right out of  the film classic “Close Encounters of the Third Kind.”

Lehneis was living on Cool Water Ranch Road, right after the Wood Valley Kampground, and on a house overlooking Bates Nut Farm. He had rented a house on the highest part of the road, with a big sliding glass door facing to the east.

“It was a perfectly clear night.” Lehneis recalls, although he doesn’t remember what time of year it was.”

At about 2 a.m. he woke up and saw three “stars” way to the east. He had a TV with rabbit ears, and he used the rabbit ears to sight the objects, so that he could tell if they were moving or not.

“I realized that they weren’t stars because they had movement,” he said. Holding his hand out towards the horizon it appeared that the stars were above three inches above it—in relative terms.

He woke his girlfriend of that time and they went outside onto the patio. It wasn’t cold, he recalls.

Lehneis describes the lights as “upside down saucers with lights underneath. They were pretty close together and in a line, like ‘one, two, three.’ They went by us at no sound at all.”

Lehneis and his girlfriend broke up soon after that (nothing to do with the UFOs, he said) and about 15 years later they decided to get together to catch up.

“I knew you were going to ask me this, Colleen,” he replied.

They walked each other through the story and it was an exact recollection, he says.

“The crazy thing is the next day [after the sighting] a newspaper had a story about lights at the San Diego Wild Animal Park. It wasn’t much of a write up.”

All these years later he still remembers them vividly.  “I think about it just exactly as I saw it. In a line, one two three, with not one bit of noise. The lights were multiple colors, red and yellow. You would think of flying saucers and these were upside down.”

At the time, he talked to someone at The Roadrunner and “nobody was much interested.”

A couple of years later, after he and his new wife had purchased a home on Mirar de Valle. They were sitting outside and his wife saw something that seemed like a moving object to her.”

“She called the Adamski people [who were operating in Valley Center at that time] and they said it was Sirius, the star. They were pretty informative.”

However, regarding the lights he saw on that night overlooking Bates Nut Farm, “I have absolutely no doubt that they were not stars.” Nevertheless, he never reported his sighting again to anyone else until he called The Roadrunner this week.

Lehneis lived in Valley Center from 1976-90 and then moved to Sacramento and Pismo Beach. He moved back to Valley Center two years ago.

The Roadrunner contact Cheryl Costa, who has published a database about all of the UFO sightings in the U.S. and asked her about 1976, and the possibility of a sighting at the San Diego Wild Animal Park.

“My database is only 21st century data 2001-2015,” she wrote back, but added, “I did peek at the Raw NUFORC DB [National UFO Reporting Center Data Base] for 1976; only three San Diego, UFO sightings listed none mention an animal park.”

The archives for the old Times-Advocate and the San Diego Union aren’t available without going to a bit more trouble than I was willing to undertake this time, so we will just have to assume that Chuck Lehneis’s memory about reading about such a sighting is accurate.

Costa’s database for 2001-2015 shows that for that period there have been four official recorded sightings of UFOs in Valley Center. Palomar Mountain and Pauma Valley each had two. I can attest to have written about quite a few more “unofficial” sightings over the years. There were 98 in Escondido. As we further explore this subject, I’m sure we will hear more about others.