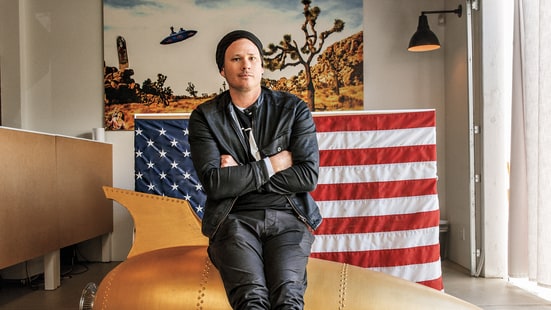 DeLonge co-wrote Sekret Machines with Peter Levenda, who has penned numerous books about history and the occult. The new book is based on interviews with scientists, engineers, intelligence officers and military officials. It aims to challenge the way people think about UFO sightings and related phenomena.

Sekret Machines is the opening salvo on the complacency of human institutions where the UFO Phenomenon is concerned,” Levenda sid. “It’s designed to shake people up, to make them question their assumptions. This book is not only a new take on the Phenomenon – by treating it as a given – but a new approach to religion that takes a hard look at religious texts and ideas from around the world to discern the traces of an event that changed us forever.”

DeLonge praised Levenda’s input: “It was his ability to frame an esoteric thesis that gave me the ammunition to speak clearly on the subject matter, and that got me in the door.”

Sekret Machines will also feature a forward from Jacques Vallée, a computer scientist and one of the most well-known writers and researchers on UFOs (he was the inspiration for Claude Lacombe, the French scientist in Close Encounters With a Third Kind). “The sightings have been ignored by academics, summarily brushed off by politicians, censored by churches, classified by the military and ridiculed by the media,” said Vallée. “Yet the reports continue to come. The experience of the unknown has only deepened, raising unsettling questions about the intrusion of the uncanny in our shiny modern world of convenient machines and superficial entertainment.”

Sekret Machines: Gods marks DeLonge’s first non-fiction book after co-authoring several novels over the past few years. The books are part of a larger multi-media project, To the Stars, which DeLonge has thrown himself into since splitting with Blink-182. To the Stars also includes music and film, and DeLonge told Rolling Stone that he’s been gleaning information from officials in the aerospace industry, the Department of Defense and NASA.

“It’s very hard to think, ‘How did this guy in a band get access like that?'” DeLonge said. “It sounds crazy. But it’s because I can speak to a very specific audience. I earned their trust. I knew my material.”