The sinister discovery of a tower of human skulls in Mexico City has cast doubt on traditional readings of Aztec history.

More than 675 skulls of men, women and children have been unearthed by archaeologists following an investigation of one and a half years.

The structure is believed to be part of the Huey Tzompantli, a rack of bones which became the stuff of legend among Spanish conquistadores as they colonised Mexico. Their writings mentioned a tower of skulls.

Andres de Tapia, a Spanish soldier who fought with Cortes in the 1521 conquest of Mexico, almost certainly recorded the structure, archaeologist Raul Barrera told Reuters. De Tapia wrote that there were thousands of skulls, and researchers believe they will find more as the excavation continues. 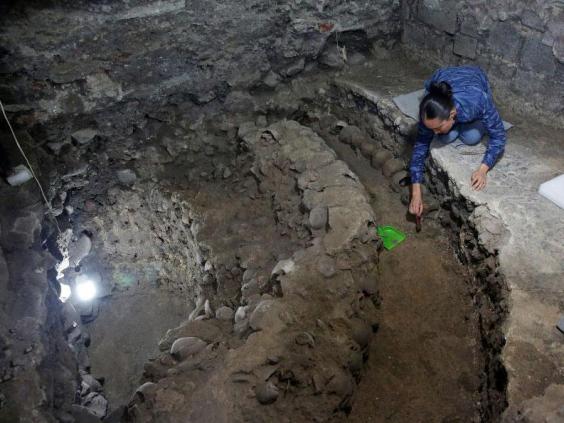 But they have always believed the skulls belonged to male warriors killed in inter-tribal combat before the arrival of the Spanish.

The discovery of younger and female skulls has perplexed archaeologists.

“We were expecting just men, obviously young men, as warriors would be, and the thing about the women and children is that you’d think they wouldn’t be going to war,” said Rodrigo Bolanos, a biological anthropologist investigating the find.

“Something is happening that we have no record of, and this is really new, a first in the Huey Tzompantli,” he added.

The structure lies close to the Templo Mayor, one of the main Aztec temples in their capital Tenochtitlan, which developed into Mexico City. Templo Mayor was used for human sacrifices as part of the ancient Mesoamerican religion.

The find is the second major discovery in Mexico City in less than a month.

In June, an Aztec ball game court was found nearby underneath a hotel. Thirty-two neck bones were also discovered, believed to have been from players who were sacrificed.

Reuters contributed to this report.