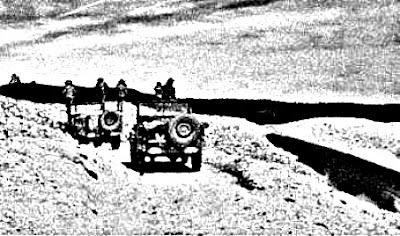 I had heard my Dad and other roughnecks in the oil “patch” discuss the crash and the “little guys inside!” I don’t think my dad seriously believed the event occurred, as he was not witness to the happenings. But the subject of the crash was the topic of many conversations at The Gas Cap Café, The Aztec Café; Bill’s Place Bar, and The Highway Lounge. I went to all of these places with my dad. While we were looked down upon as “oilfield trash,” the so-called “good” people of Aztec had no problem cashing my Dad’s oilfield paychecks.

I went into the US Air Force in March of 1960. Was stationed at Bolling AFB, Washington, D.C. and later at Kunsan AB, Korea. After the isolated tour of duty in Korea, I was allowed my choice of duty assignments. I opted for a consecutive overseas assignment, and I asked for Japan, England, France, or anyplace in Europe. In 1964, I was assigned to the U. S. munitions base at RAF Welford, Newbury, Berkshire, England.

Duty in England was good. I bought a little English car, a Morris Minor. My sister in Farmington, NM mailed me a NM State University window sticker, which I put in the window of the little car.

I was at work at the base motor pool one day when a fellow from the vehicle maintenance shop walked across the street and asked if I was from New Mexico, as he had seen the sticker on my car. We introduced ourselves. His family name was XXXX, with the nickname of “Sam.” We compared past duty stations, and realized that we had both been stationed in Korea about the same time! I was at Kunsan AB, and Sam had been at Osan, AB in 1963/1964, before we were both reassigned to RAF Welford in England.

I told Sam XXXX that I was from the 4-Corners area of New Mexico and he asked me if I ever lived in Aztec? I told Sam XXXX that I had indeed lived in Aztec and that I knew the area and town fairly well. Sam said that he had been in Aztec briefly in 1948. I assumed that he had been in the oilfield. Sam suggested that we meet at the Airman’s Club after dinner and talk. I agreed.

Our conversation was pretty much about Aztec. I asked Sam XXXX why he was so interested in Aztec, NM?

Sam asked me what all I knew about the UFO crash at Aztec in 1948? I told him that I had heard about it for most of my life, but that I had no direct knowledge about it. Sam XXXX then asked me if I thought we were alone in the universe? I replied that I thought there had to be intelligent life out there somewhere. Sam told me that he knew for a fact there was life from elsewhere, as he had seen some actual “little bodies” and that he had been involved with the UFO crash retrieval at Aztec, NM in March of 1948! He had been stationed at Roswell, NM and was flown with a group of USAF personnel to Durango, CO by C-47 (DC-3) aircraft, then driven on down to the crash site.

Sam told me that he had seen the bodies at the Aztec crash site, as they were loaded onto a truck. He did not tell me if the bodies were in body bags, caskets, or preserved in any way, but he thought they were placed in the cargo truck for protection from the elements and out of sight. He thought the bodies were eventually moved to Ohio by road transportation and that the craft was moved by road transportation to the new secure airport at Las Alamos, NM. Sam also related that a light, spring, snowstorm had occurred while the detachment was at the crash site before the craft was dismantled and removed. Sam was amazed that snow and ice accumulated on the military vehicles, but there was no accumulation on the craft’s surface.

I asked Sam XXXX about food and quarters for the troops while at Aztec. Sam said they were on the crash site 24/7 and never left. They were provided food rations and sleeping bags. Sleep in shifts was in, under, or in the cargo bed of some of the military vehicles. No tents or cots or hot chow was available. Latrine facilities were in the brush. Sam XXXX’ main duty was to provide perimeter security of the crash site, to keep unauthorized persons away. Sam XXXX was at the very bottom in the chain of command, and was a very young trooper at the time.

We carried on this conversation for the next three years in which Sam’s story was never changed, enhanced, or embellished. Sam XXXX warned me not to talk about the event at Aztec, as talking about the UFO crash had caused his US Air Force career to suffer badly. He was the only A/2C (E-3) with nearly 20 years of service that I had ever met. I was 22 years old, and Sam was in his late 30’s. Sam XXXX always looked over his shoulder, and always ended our conversations that perhaps “he had talked too much already.”

Sam XXXX and I both were advanced to A/1C (E-4) about the same time at RAF Welford. Sam and I both got married about the same time in 1965. We both moved into the married quarters on the base at RAF Welford, into trailer houses next to each other for nearly three years. Sam is a good friend, and I certainly hope that he can be located. I hope that he survived Vietnam!

I went back to the US for separation from the US Air Force and entry into the US Navy Seabees, in July of 1968. Repeated tours of Vietnam followed. Sam XXXX went directly to an air base in Vietnam, I think, about the same time. Have not seen or heard about Sam XXXX since. As I am now 63 years of age, Sam XXXX will be about 83 years of age or more.

I heard Stanton Friedman on a radio program one evening in 2003 talking about Scott Ramsey and his research into the 1948 UFO crash at Aztec, NM. Mr. Friedman asked for anyone with any knowledge of the event to e-mail him. I sent an e-mail and it was forwarded to Scott Ramsey.