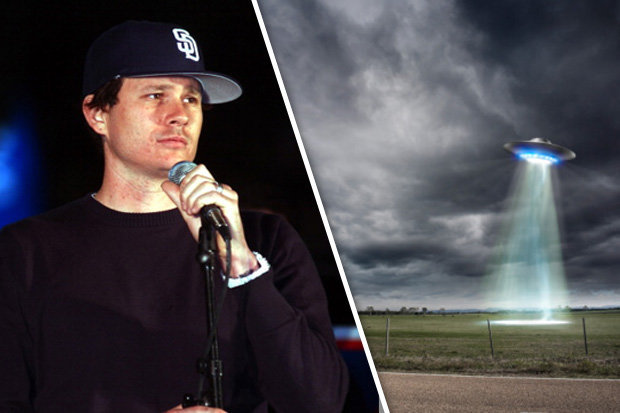 Ex-frontman DeLonge hinted there would be a shock development in the world of UFO enthusiasts.

Speaking at the International UFO Congress, where he was named Researcher of the Year, DeLonge said he was involved in some “serious s***”.

Last year it emerged he was involved in a mystery project after emails he sent to Hillary Clinton’s campaign manager John Podesta were published by WikiLeaks.

DeLonge has long been involved in extraordinary alien theories, claiming he has met extraterrestrial beings near the shadowy military base Area 51.

He said: “There’s a lot that I can’t say, but there’s some that I can, but there will be an announcement in like 60 days.

“I’m so appreciative that I’ve been acknowledged for this stuff, but I’m not done.

“I’m just like you guys. I spent 20 years up all night, reading about Roswell, Dulce, Serpo, Churchill, the crashes here, Nazis building craft there, Antarctica, what’s on Mars, what’s on the back of the moon, anomalous structures.”

DeLonge said he was using his fame to do something “pretty ambitious”.

He continued: “Well, I think a lot of people doubted it, and they thought it was crazy that this musician would have this kind of access.

“And then the WikiLeaks thing happened, and you guys saw that I’m into some serious s***, and I’m making really good progress.”

Musician DeLonge had been in contact with Clinton’s senior aides about the alien spacecraft rumoured to have crashed in Roswell in 1947.

Claiming to have spoken to a scientist who worked on the alleged spacecraft, DeLonge asked Mr Podesta for a meeting to discuss the case.

And the leaked emails reveal he had already held talks with Podesta.