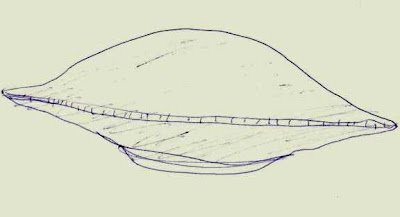 house when they saw a huge object hovering over a field, to the right of the road that they were driving on. At the time of the sighting, it was a bright dawn with a clear, blue sky. ML had spotted the object first through the trees and, whilst trying to keep it in sight, nearly drove into the ditch on the left-hand side of the road. His wife exclaimed to him to be careful, wondering why he was driving in such an erratic manner. He stopped the van and told his wife to look out through his window. He asked, “What do you see?” She said, “What is it?!” He asked, “What does it look like?” She said, “It’s a spaceship!”

ML informed me that the object was, in his estimation, many hundreds of feet in length, with pastel lights all around it that appeared to pulsate softly. ML further described it as “cloud-like”, saying that the colours around the object were like “moving clouds”. It is possible the object was surrounded by a cloudy mist, perhaps a camouflage, or its colour was a cloudy grey.

The couple observed the object for a short while, which ML estimated to be a few minutes. He had gotten out of the van and climbed up on the bonnet (hood) to get a better look. I asked ML to sketch the object. He was able to do this in a matter of a minute or so. I took him outside to look at the sky and asked him to give me an approximation of the angle subtended by the object. That is, it’s length as it appeared to the naked eye. The figure above is the first sketch made by ML. It shows a classic “flying saucer” shape.