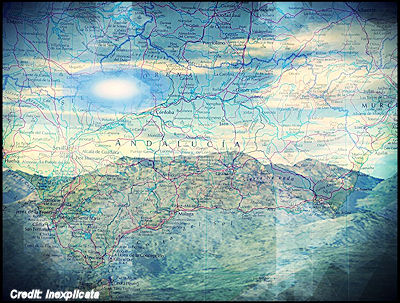 The summer of 2017 has been particularly active as regards aerial mysteries and unknown phenomena. The UFOs of yesterday remain as current as ever and materialize yet again to fill us with wonder and disbelief.

This is precisely how the protagonist of a UFO encounter in the locality of Brenes felt on the morning of August 2nd. It was something so incredible and unknown that she could hardly credit what he was seeing. Her name is Sandra and she witnessed something astonishing at 8:30 a.m.: “I was on my way to work and took my daughter over to my mother. It was then when I saw a light-emitting source in the sky. I can almost tell you that it was oval; issuing bright flashes even though it was daylight. The light was irregular and was in view for nearly a minute. I couldn’t believe what I was seeing. I watched it carefully and saw how its size decreased and became smaller until it disappeared.”

Sandra, visibly excited, recalls every second of this sighting. “I’m not easily shocked. My partner and I love these subjects, and a while ago, we spent some time in Gibraltar and saw three lights that left our jaws hanging. But this morning’s event has been truly impressive.” The witness called another person – Jesús, a worker at a nearby bar, who jokingly said: “They’re here!” but when he saw the luminous form, realized they were both looking at a truly extraordinary phenomenon.

Fernando Romero, driving from Tocina to Seville around the same time, also saw the mysterious object: “It was a large luminous form, a point of light that stood out in the sky, having the apparent size of a large marble. The object, or whatever it was, flew parallel to the horizon, slowly. I thought it was an airplane approaching Seville with its lights on, but when I looked more closely, I saw this wasn’t the case. The light grew and shrank intermittently and stopped. It was very odd. Then, some thirty seconds later, it disappeared and left me stunned. I don’t believe in this UFO and alien stuff, but I can tell you that was something very strange.”

Confirmation of the nature of the sighting was sought with Seville Flight Control, which confirmed having no air traffic matching what was seen by the witnesses. The same happened with military flight controllers. No astronomical phenomenon matches the nature of this UFO sighting. Nor is the passage of International Space Station (ISS) a valid explanation. By strict definition, these witnesses saw a UFO.

The astronomical phenomena for the month of August will be the traditional “Lágrimas de San Lorenzo” (St. Lawrence’s Tears) around the 12th (Perseids), also bearing in mind the partial lunar eclipse on the 7th of this month. The UFO phenomenon remains present in the heavens over Seville. It is a timeless phenomenon that appears before witnesses at any time of day and which can shatter preconceived notions about “things seen in the sky whose real nature we do not know”. The Brenes UFO almost surely marks the start of other sightings in Seville.