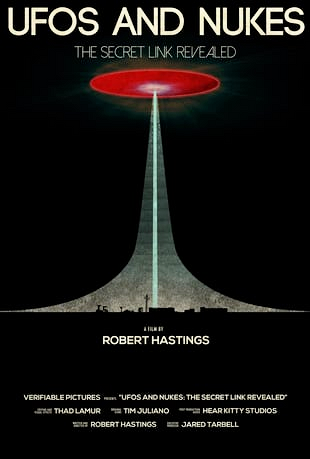 The press conference was the culmination of years of investigation into such events that I had begun in earnest in 1973, when I started interviewing U.S. military veterans regarding their involvement in cases where UFOs had demonstrated an obvious interest in nuclear weapons sites.

By 1981, it was clear to me that the situation was very real and ongoing and, I concluded, needed as much exposure as possible. Consequently, I went out on the college lecture circuit to attempt to inform the American public, as best as possible, about the dramatic developments that had been kept from them for decades.

In addition to my speaking engagements, my 600-page book, UFOs and Nukes: Extraordinary Encounters at Nuclear Weapons Sites, published in 2008, has gradually captured an ever-larger, worldwide following over time.

Nevertheless, it seemed to me, the largest possible audience would be generated by producing and distributing a documentary film that presented the hidden history of nuclear weapons-related UFO activity in a fast-paced, visually-engaging manner, hence the creation of my documentary film, UFOs and Nukes: The Secret Link Revealed, which is now available at Vimeo On Demand.

While the film has only just been made accessible, initial reviews are very favorable. Gary Heseltine, editor of the UFO Truth e-zine, called it “The best UFO documentary I’ve ever seen.” Frederik Uldall, of the Exopolitics Denmark group, wrote that the film is “Absolutely brilliant! Definitely one of the top five UFO documentaries of all time.”

So, dear reader, are you tired of the many Fluff-and-Bullshit UFO programs offered up on commercial television these days? Me too, which is why I made my own film. Check it out—you won’t be disappointed. Rent or buy it here.