The NSA Releases a Formerly Secret Document Via FOIA Request 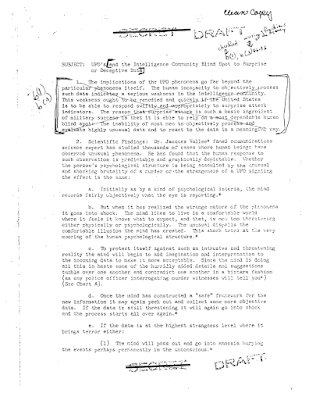 NSA UFO Docs. Two redacted sections of the seven-page file were noted. The first section provided an example of how human response to perceived unusual phenomena can be detrimental, particularly from a military perspective. Images below show previously redacted pages on the left, with the now fully disclosed pages on the right.

Offering an example of detrimental responses, the author explained how a USAF technician “was engaged in first level traffic analysis and intercept processing against Soviet Bloc countries,” when one of the countries began to report an unusual radar track. It was described as “a high flying fast moving object with an erratic flight pattern.” Although identified as occasionally moving against the wind, the Bloc “began reporting the object as a balloon.”

“The next Bloc nation picked up the object and continued the designation of balloon despite the erratic flight pattern, high speed, and against the wind maneuvers,” the author continued.

It was further explained that the airman noted a variety of emotional reactions taking place among personnel within the American processing facility. Such reactions included “everyone was more edgy and silent than usual,” as well as “aggressive and distracted responses” to requests for clarification of some of the data.

The author concluded human flaws leave us blinded to unusual or surprising material. Some people, however, it was suggested, “are less affected by strange phenomena than others, though still frightened by it, they remain capable of reporting it with a fair degree of objectivity.”

The second redacted section was the author’s recommendations to effectively address such challenges, which included training intelligence analysts “to be able to deal with unusual phenomena.” It was also suggested:

Select a group of analysts and evaluators who have the natural capability to see unusual phenomena and be able to process it. Form these analysts into a special surprise alert team responsible directly to the JCS and the highest levels of the intelligence community and intensively train them further in the art of processing surprise material.

The document offers some intriguing points for consideration. Among them is the author’s interest in Air Force personnel reactions to surprise data. Also noteworthy, in my opinion, is the author’s seemingly at times uncritical interpretations of reported UFO phenomena and ways to conduct investigation.

For instance, an event can be “so shockingly unusual,” the author reports, it “is buried in the unconscious of the person where it is only accessible to hypnosis” or other carefully conducted modes of communication. Such views show how deeper, more accurate understandings of the unreliability of hypnosis as a memory retrieval tool have evolved in the scientific community and presumably among NSA assets. We periodically see similar outdated views reflected in IC Cold War era docs concerning other UFO and paranormal topics, as well.

Related dynamics and NSA historic willingness to explore the fringe were considered in a March blog post titled, NSA Interest in the Paranormal. In a manner of speaking, the Gulf Breeze Six episode – whatever it may have ultimately involved – was not an anomaly as much a part of the natural progression of topics explored and activities regularly conducted by the Agency. That doesn’t necessarily make it any less interesting, but should be clearly understood as the context is relevant: NSA and other agencies, such as DARPA and CIA, are as historically involved in exploring the fringe as debunking it, if not more so. That creates many potential options for the IC from one era and project to the next, as well as lines of research for those of us following along.