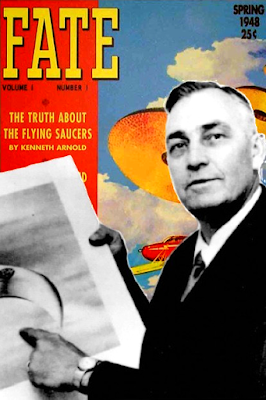 Arnold.” (11 April 1963 entry, Forbidden Science Volume I.) However, in the years since, Arnold’s role as the herald of the UFO age has been diminished by the overemphasis and promotion of the Roswell crash franchise. His role is important, and there’s a lot more to his story.

Shortly after his encounter, Arnold had the first of many other sightings on his flight to Maury Island, a trip that began his informal role as the first civilian UFO investigator. He became interested in Charles Fort’s books of phenomena and joined the Fortean Society. Over the years, he came to believe that the objects he’d seen were living creatures, possibly related to what Ezekiel had described in the Book of Revelation. There’s a lot more to Kenneth Arnold’s story than just his first sighting, but UFO history has largely ignored the story.