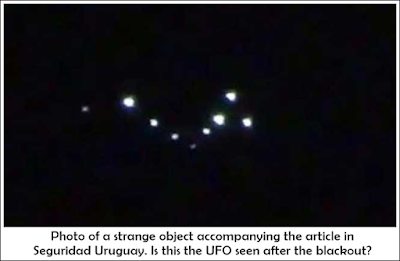 Strange lights were seen forming the shape of a triangle, holding their position for far longer than a helicopter or aircraft would, adding to this the fact that the lights were considerably bright and were separated from each other by a broad distance, according to eyewitness statements.

The Uruguayan Air Force was the first in Latin America to create a UFO research commission 32 years ago. Several factors must be discounted when confirming an object as a UFO. The Uruguayan Air Force (FAU) created the Comisión Receptora e Investigadora de Denuncias de Objetos Voladores No Identificados (CRIDOVNI), making it the first in Latin America to have an office devoted to investigating this phenomenon. Its creation stemmed from the number of sighting reports received during the 1970s. Currently, with new technologies, the commission receives images and reports such as the one that recently occurred in Durazno.

To learn more about how an unidentified flying object report is handled in Uruguay, El Observador consulted Col. Ariel Sanchez, CRIDOVNI’s president, whose agency handles tasks similar to those performed by the legendary “Area 51” in the U.S.A. in a sweeping comparison.