A U.S. Air Force employee, who wishes to remain anonymous and who is now retired, has a strange story to tell about underground bunkers being used as storage for dead aliens. The storage bunker was said to be underneath the Wright-Patterson Air Force Base in Ohio.

The Air Force base is a highly secure installation and it has a reputation for being the resting place of many dead aliens, some well-preserved, and others not so much. It is thought that the aliens were recovered from UFO crashes, while many sceptics have written off such claims; one retired employee isn’t so sure.

The Air Force employee was 27 years old at the time and he revealed that he was ordered to go to a particular building on the base on a wintery night in 1988. This was a building that he hadn’t been to before and it was connected to a weapons and storage area. The employee said that three men in dark suits met him at the building and showed him through a door, which revealed a big elevator, which the men went into and descended. He was then taken down a corridor where a big vault like door stood at the end.

One of the men opened up the door, and in what the employee said was a high pitched and strange voice, ordered him into the room. He then told the employee to take a look inside a large container. Inside that container was a badly damaged body of what could only be an alien, with a huge head, black big eyes and a small skinny torso that was severed. 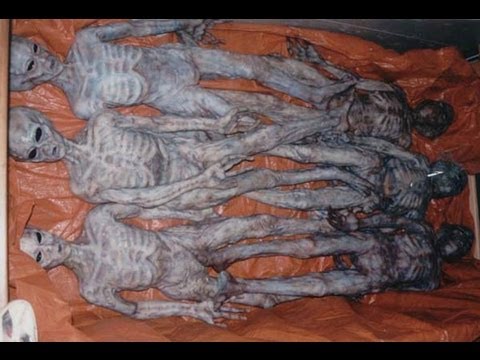 The employee was then taken into another hidden room and told that he must sign a document stating that if he ever said anything about the things he had seen he would be prosecuted for breaking security regulations. He signed it and was then allowed to go back to the surface and continue his work.

A Test Of Loyalty Or The Real Deal

His first thought was that someone was playing a trick on him as what had happened didn’t make much sense. After all his work on the base didn’t have anything to do with UFOs or aliens. Therefore he could not work out why he would be chosen to be shown such things.

Of course, it may have been so that his loyalty could have been determined. If he remained quiet about what he had witnessed he would be seen as being loyal. Shortly after this, the employee was assigned to a sensitive project that didn’t have anything to do with UFOs and aliens, this was just five days after he was shown the dead aliens in the container. So was the incident nothing more than an elaborately staged event to find out if and to what extent the employee could be trusted, or was there actually dead aliens being stored underground at the base and shown them for reasons that were not revealed?

The story does seem to back up some of the other controversial stories about military employees being exposed to dead aliens, such as the Hangar 18 stories. Are there dead aliens being stored underground at military bases and were these the real men in black that escorted the employee?