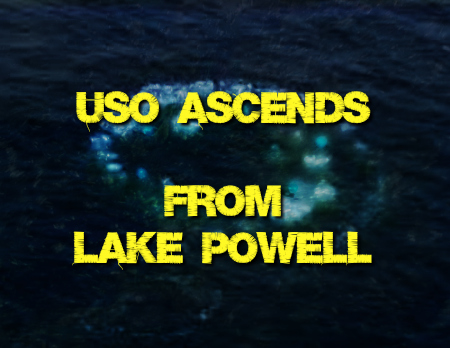 Lynn called in to tell of her USO encounter:

“The incident we had was up on Lake Powell (straddles Arizona & Utah). We had missing time and our watches were in sync, my husband and I had a boat trip up there. In the evening, like at 8:30 or so, we had like, we were off on the shore. You know, Lake Powell was flooded. It had been flooded. It took them 17 years. So we had a little spot. It was like our last night. Every night at 12:30 am, I was waking up terrified. Feeling just terrified. And on the last night of our stay, I think it was 3 nights, I saw this UFO up over the mountain area. And it’s all Indian land, on a reservation.

So, anyway, that being said, I was awakened at the same time. Every time it was like 12:30 am but this time it looked like it was 5 o’clock in the morning and we were supposed to be leaving to get the boat back at 4. And I thought we were late. Anyway, I was off at the back. In the back of the boat that was in the water. And I saw this thing raise up out of the water. It was like a platform and it was like, I’m thinking…am I really seeing this? Are my eyes playing tricks? It was kind of a full moon but it was like going in and out of the clouds.

During the time that we were there, I like to fish. My husband doesn’t like to fish. Anyway, we were fishing and this great big huge school of fish came flying up out. It must have been 40 or 50 feet, hitting this wall in this area of the mountains. There was still part of this mountain sticking out. Have you ever seen that? (Jimmy asks about the object) I saw it raise out of the water. It was edged on either side… I cannot explain it. It was about 8 or 9 foot across and it had edges that went down in on an angle. It was weird looking. I just saw it raise out of the water, I’m guessing about 2 feet or 3 feet. It was weird. It was just really really strange. (Church asks if her husband saw it) No, he was up at the front of the boat trying to get, you know, fishing gear and stuff. It was a house boat. I kept saying, C’mere, look at this! Look at this! And every time he would say, I’m busy. We gotta get going because we’re late, but we really weren’t late. The time was… it looked like was 5 o’clock on our watches but it was really 12:30. Every time we tried to get something on the radio, it would like skip. We’d be listening to the radio, to the station and every time when it came time for us to find out what time it was at the hour, it would go crazy. We couldn’t hear it. It would go out, the radio waves. It was crazy.”

NOTE: Lake Powell has a history of UFO related experiences since the lake was built and filled in 1980…including USOs. Chester Burlingham, a local UFO investigator made the following statement in November 2010:

“Many people believe that aliens are just flying around in the sky. But they’re not. They are also in the water and on the ground – all around us. What makes this unusual is that the aliens are setting up a base in Lake Powell, a man-made reservoir. This has some of us in the community alarmed.”

“National Guard have occasionally been dispatched to keep an eye on things. Something’s going on, we just don’t know what it is yet”

Authorities had multiple reports from citizens visiting Lake Powell on November 8, 2010, that they saw an unidentified object dive into the reservoir. Government authorities were called in to investigate, but they are remaining silent. However, many locals know exactly what it is. John Comito, visiting from New Hampshire with his family, stated:

“It’s a UFO. I’m positive of it. We’ve talked to a number of people around here and they said they’ve been seeing the object come in and out of the water for the last three months.”

The 37th Parallel: The Secret Truth Behind America’s UFO Highway