Recently, a few sites of monuments that have been excavated in Saudi Arabia have been named the country’s first UNESCO heritage site, making its mark on the world. The abandoned monuments are nicknamed “Lonely Castle”, as these lonely giant monuments are in the middle of an arid desert, a testament to its solitary location until it was only recently found.

The carved monument is truly a breathtaking, albeit lonely, sight against its acrid and barren desert background. The real name of this monument is Qasr al-Farid, a true, living historical story of the timeless age of nomadic tribes who once roamed the Saudi Arabian deserts, scouting the land for water with their herds whenever they could. It was a testament to the mythical cities carved out of stone centuries ago, which till today, not much is known about.

It was erected centuries ago by the builders of the Stone City Petra, and rather than a monument, it was a tombstone – which till today, no one has figured out belongs to whom – or rather, whom it was meant to be for, as the monument remains unfinished. However, even unfinished, in all its glory, it shows us a glimpse into life centuries ago of the Nabataeans, as this was built during the period of their reign.

Chiseled buildings completely hand-crafted, just as this monument was, probably filled their cities and their buildings were strong and sturdy – as this monument is still standing strong years into the future. However, it is partly due to the weather of the area surrounding it. However, a building that can stand for centuries is worthy of much praise. 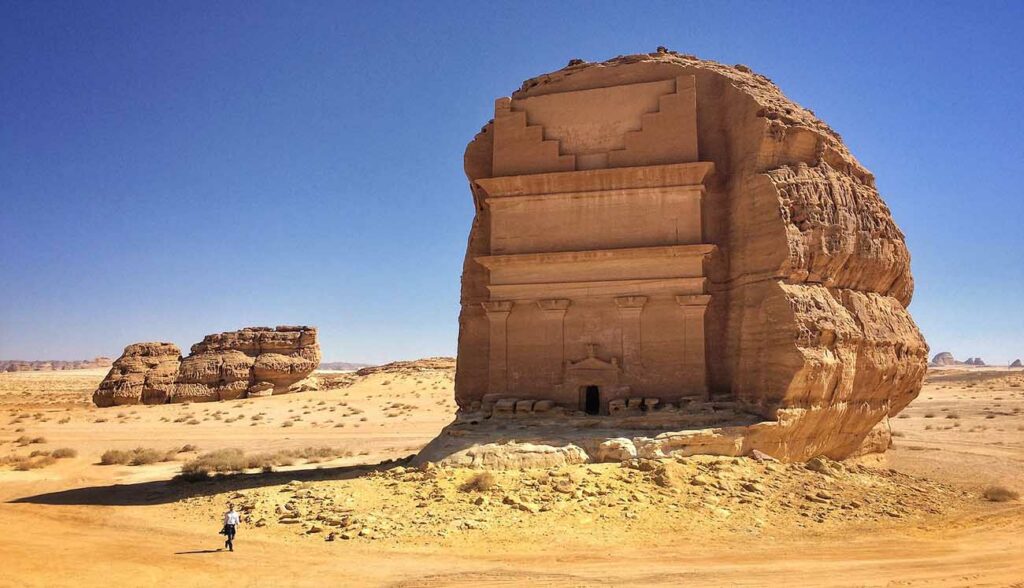 Qasr al-Farid is one of the 131 monumental buildings carved out of stone in the area. However, it has its nickname because it is completely isolated from the other 131 monuments – all alone in the lonely and vast desert. It is located in Mandarin Saleh, the pre-Islamic site that is some 1,400 miles north of the Capital, Riyadh.

2,500 years ago, the reign of the Nabataeans was prospering – they built they magnificent city of Petra in Jordon, and had politics, developed agricultural activities, prospered in art, engineering and reading the stars. Their mysterious reign and stories carry on, thousands of years later, in the form of their chiseled buildings which will never fall. Jane Taylor has since pointed out in her book about this mysterious nomadic tribe, and if you are interested in this mysterious tribe that could build everlasting monuments, read more in her book titled: Petra and the lost kingdom of the Nabateans.